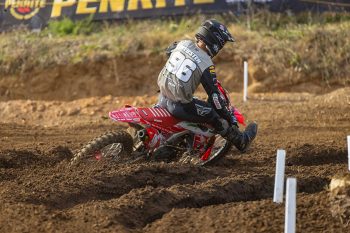 Freshly-crowned MX2 champion Kyle Webster is now looking ahead towards his transition to 450 machinery with Honda Racing in 2022.

Webster took five out of six races victories on-route to his maiden ProMX MX2 title this season, winning the championship by 34 points after the remaining rounds were cancelled altogether.

The premature season end means the 25-year-old will not be able to make the Australian national racing debut for the all-new 2022 CRF250R. Now, off the back of a dominant year on the 2021 model, preparations begin to make his eagerly anticipated step to the MX1 category.

“I have been riding the 2022 CRF250R for about three months and I was keen to race it,” Webster explained. “It’s on a whole other level. I will try and get a race in on it before the end of the year, but now that the season has wrapped up it’s time to get to work preparing for next year and the 450 championship.”

The 2021 MX2 champion is highly regarded within the Honda family and has congratulations and support from Honda Australia’s general sales manager Tony Hinton as he makes the transition.

“It’s disappointing the season was cut short, but Kyle positioned himself perfectly for the overall win and we certainly look forward to watching him on the CRF450R next year,” Hinton said.

Motorcycling Australia are currently working on plans for the 2022 Pro MX calendar, while news on who will join Webster in Honda Racing’s line-up is expected to be announced shortly.