The inaugural Penrite ProMX champions have been declared after the decision was made to cancel the remainder of the 2021 season, crowning Luke Clout in MX1 and Kyle Webster the MX2 title.

Clout and Webster were the points-leaders following Maitland’s third round, with only three events required in order for the series to be awarded.

With the covid-19 pandemic placing the series on hold following Wonthaggi, Canberra and Maitland, state border closures and uncertainty has led to the decision to conclude the season. It was originally slated to span eight rounds.

“Motorcycling Australia (MA) and the ProMX Management Team are thrilled to announce three new Australian champions have been crowned across their respective classes of the Penrite ProMX Championship presented by AMX Superstores (ProMX),” the statement from MA read this morning.

“The ProMX Management Team has today made official the difficult decision to conclude the inaugural ProMX Championship after three rounds of the championship have been run. Unfortunately, after no clear directives have developed from state governments as to a realistic time frame around state border openings, the necessary decision has been made that the ProMX Championship cannot be completed in a timely manner before the end of 2021. 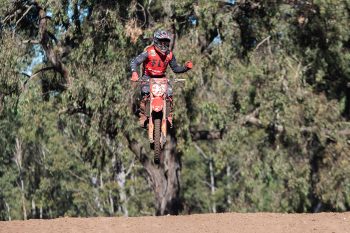 “The ProMX management team wishes to acknowledge all competitors, teams and fans for their support and persistence in an incredibly challenging domestic climate here in Australia over the past 12 months since the new ProMX Championship was announced.

“We are proud that at a minimum, we were able to run three championship events of the inaugural ProMX Championship, crown champions in their respective classes and establish a return to racing in motocross on a national level for the first time since 2019.

“The experience gained this year will serve as a fantastic base for the 2022 ProMX Championship, with preparation already well underway. Guaranteed to be bigger and better in 2022, fans and industry can expect exciting announcements very soon around next year’s championship developments.”