Ferris to assess options in the lead-up to 2020 season

Appearances in the final two MX Nationals events this year all but confirmed. 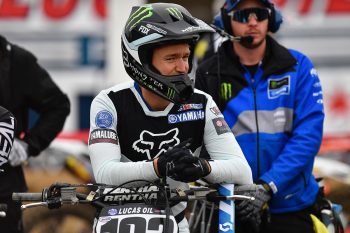 Returning home to Australia was ‘the only viable decision’ for reigning Australian MX1 champion Dean Ferris, who cut his Pro Motocross journey short following the Southwick national held a fortnight ago.

Ferris, 29, was supposed to contest the full 12-round schedule with Monster Energy Yamaha, firstly as a replacement rider for Aaron Plessinger and then as the third rider on the factory team alongside Justin Barcia and Plessinger.

However, after achieving best overall results of eighth at both Thunder Valley and Southwick, a surprise announcement prior to RedBud revealed Ferris and Yamaha had mutually agreed to part ways mid-season. Plessinger had returned from injury at Southwick, which was Ferris’ final appearance with the team.

It’s been an odd 12 months for Ferris since clinching a third-straight MX Nationals championship with CDR Yamaha Monster Energy in Australia last August, opting not to renew that contract locally and, instead, trying to secure a top-level seat in the US. It finally eventuated just weeks out from Hangtown’s opener.

Prior to that, Ferris spent time training aboard a stock Suzuki at home, filled in at Monster Energy Yamaha in MXGP before a minor knee injury ended that trip, plus he rode a Raceline-prepared KTM in the Murray Bridge rounds of the nationals only two weeks before reuniting with Yamaha overseas again.

The Kyogle resident is adamant that he has no regrets in chasing his elusive dream of competing in Pro Motocross, but indicated that it had been becoming increasingly difficult to make the program work by finishing outside of positions where he would be able to earn bonus money. It appears likely that his future now lies back home in Australia from 2020.

“I don’t regret the decision in going,” Ferris told The Conversation podcast this week. “It’s something I had to do, just to get it off my chest. At this point, I think this year was my big chance to make it in the big league and it just didn’t or hasn’t really worked out how I wanted it to.

“For me to say ‘hey, I’m going to wait for another ride to come up in America next year’ would be crazy at this point because it’s been a whole 12 months of exhausting everything I have – even my energy levels – to go and do it. It’s not that easy to fly over and jump on a bike – there’s so much that goes into it.

“At this point, I’ll be looking at my options next year, for sure, but I think that this year honestly was my big chance and it just didn’t work. You know, for me to pick up a ride next year and make it happen as an outdoor-only guy, filling in contracts or being a rider for a team was a good idea, but I actually had to do a bit better than a few eighth places.

“I needed to be chasing for a podium for a team to be like ‘alright, we’re going to get this insurance policy and get the third rider’. While my results were respectable, that’s how I see it – I really see it as a team needs a guy that can win or be a podium guy if they’re going to do it. I was the fill-in guy and Plessinger came back, so the deal I had was always going to change when Plessinger came back and it was definitely draining.

“Also, I feel like I needed to make a big step to get to those next guys where I could get bonuses and make it worthwhile. I feel like I kind of exhausted all the avenues… the only viable decision was for me to definitely come home after Southwick. My whole life I’ve been wanting to get there and it comes down to that – the second half I just couldn’t do it, but I’m thankful for the opportunity.”

Ferris has revealed that he is working on an arrangement that will see him back in the MX Nationals for the final three rounds to be hosted at Moree and across Coolum’s double-header. It’s not clear what his deal to re-enter the series will be at this time and he opted not to comment when contacted by MotoOnline.com.au this afternoon.

“I think you’ll see Dean Ferris come back for the last two rounds, yeah,” he announced in the Recover8-sponsored podcast (Ferris is an ambassador for the Recover8 brand). “I’m working on it, I mean I’ve only been in Australia for two days, but that’s the goal. I feel fit and like I’m up to scratch. I always love racing here in the MX Nationals – Moree’s cool and I always like going to Coolum, but yeah, why not?”

CDR Yamaha Monster Energy team owner Craig Dack also chose not to comment earlier today when asked if a high-profile return of Ferris would be possible from next season. The Victorian-based organisation is currently fielding the combination of Luke Clout and Kirk Gibbs in this year’s outdoors.

Ferris has had mixed success on the world stage during his career, which has included a lengthy stint in the world championship between 2012 and 2015. His best season came in MX2 during 2013, winning multiple races and the GP of Belgium on his way to sixth in the standings.

A strong showing in the Motocross of Nations (MXoN) that year, when he finished runner-up in MX2 behind Ken Roczen, led to a factory contract with Red Bull KTM in America. His time back then also ended sooner than expected in the US, going on to finish out the season in MXGP with Husqvarna following a wrist injury sustained early in the year.