Ferris validates MX Nationals return as preparation for US endeavour 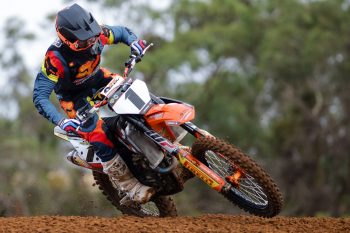 Ferris revealed two weeks prior to the weekend’s double-header that he would contest the round with backing from Raceline KTM and supplement company Recover8, the decision taking the industry by surprise in what would be his first motocross race domestically since Coolum last year.

Equipped with the number one plate, the New South Welshman rode to a stellar 1-1 scorecard in Saturday’s fourth round, while he was unable to land on the box in Sunday’s outing, accepting a fourth overall placing.

“I think it was a good thing to come here, get some gate drops and blow out the cobwebs, because it seems like it’s been a long time since I’ve raced motocross,” Ferris explained to MotoOnline.com.au. “It’s perfect preparation, I would say.

“I was training my butt off leading up to his, so I would say it’s a really good call to come here, and ballsy on my part, because this track is one I’m probably least strongest at relative to the competition. It was good timing, and I thought I’m not going to not take an opportunity because it’s not my strongest track.

“I definitely want to win everything – it was sweet to win on Saturday. I’m pissed about not getting on the podium today – that hasn’t happened since god knows how long – I think since here three years ago at this very track. This weekend was good preparation.”

The 28-year-old, who’s yet to officially lock in a deal for the Pro Motocross series, is confident news on his future will be delivered imminently.