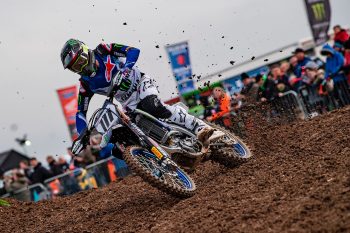 Three-time Australian champion Dean Ferris has been ruled out of his replacement ride in the 2019 MXGP World Championship due to the knee injury he sustained at Matterley Basin last weekend.

Ferris, 28, was signed to a short-term deal in place of Romain Febvre at Monster Energy Yamaha, however a difficult British grand prix appearance led to complications with his knee that will now require further medical attention.

“It’s a shame that Dean’s opportunity has been cut short,” commented Monster Energy Yamaha manager Massimo Raspanti. “He was improving every time he rode the bike and was a pleasure to have around the team. Luck is a factor in top-level motocross and both Dean and Romain have been unlucky this season. I hope he makes a quick recovery and I wish him the best for the rest of the year.”

It was initially intended that Ferris would fill in for former world champion Febvre in Great Britain, The Netherlands and Trentino, however he is instead due to return home to Australia today. It’s unclear what his future will hold from this point, Ferris previously stating that Pro Motocross was still his target.