The opening round has arrived, being the first stop of the 2019 Pirelli MX Nationals this Sunday at Appin and pre-season anticipation has peaked this week. This is Motoview on MotoOnline.com.au, presented by Thor MX Australia.

Personally, I couldn’t think of an opening round stronger than Appin. Situated in south west Sydney, it’s nearby where a number of the industry’s major manufacturers are based, including the likes of Yamaha Motor Australia, KTM Australia, Husqvarna Motorcycles Australia and Kawasaki Motors Australia, as well as a number of additional distributors and associated companies.

It’s also a home round for us at MotoOnline.com.au, around 25 minutes from the Foremost Media office, so that is always a plus. If Coolum is the home of the title-decider later in the year, then I say lets cement the Macarthur Motorcycle Club as the season-opening event from this point on.

There’s so much to be excited about ahead of round one, since the fields are packed with race-winning potential and we’re also going to see a record-breaking first round entry list of 150-plus riders according to series promoter Williams Event Management (WEM). A new Sprint format will also be introduced in MX1, which we reported on earlier today, and that will be interesting in itself. 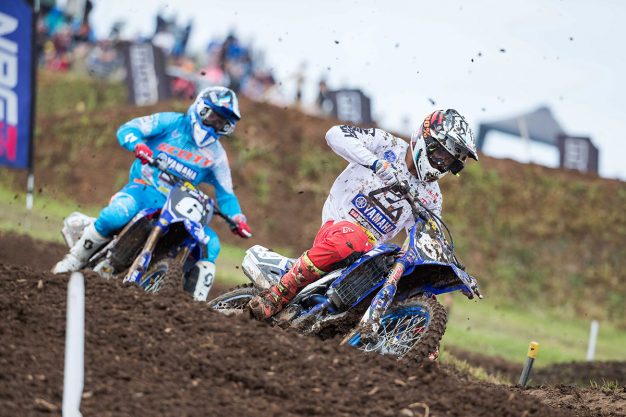 What is it about this time of year that makes the beginning of a new season so attractive? For one, there always seems to be new riders that lift their game – think Mitch Evans’ MX1 debut last year in Newry – and we as onlookers are always on the search for those latest storylines, be it surprises or disappointments. And there can be plenty of each in the opening rounds.

On paper, with Dean Ferris departing CDR Yamaha Monster Energy following a run of three-straight championships, the MX1 championship should be wide-open. Of course, much of the attention will be cast upon Ferris’ replacements, Kirk Gibbs and Luke Clout, but definitely don’t count out the experience of Penrite Honda’s Brett Metcalfe – read more about him from Jeremy below – and Todd Waters back in Australia with DPH Husqvarna, in particular.

There are more riders who most certainly have what it takes to challenge for the podium, if not wins. Think Hayden Mellross (Raceline KTM), Caleb Ward (Davey Motorsports KTM), Dylan Long (Empire Kawasaki), Richie Evans (Yamalube Yamaha Racing) and co. That type of depth will always deliver over the course of a season, especially when you factor in the more compact motos at selected events and the varied venues that the championship will visit throughout the 2019 campaign.

In MX2, defending champion Wilson Todd’s hopes of heading to Europe fell through, leading to his defection from Serco Yamaha to DPH Husqvarna, interestingly alongside last year’s MXD title-winner Bailey Malkiewicz. At Serco will be Aaron Tanti and Nathan Crawford, both who will be supremely fast, plus you cannot count out Yamalube Yamaha’s current 250 supercross champion and former national champion Jay Wilson.

Outside of the above, we know Kyle Webster will be on-pace at CRF Honda Racing, as will new Raceline KTM signing Jy Roberts and another Appin local in Dylan Wills, who has had a good lead-up to this season as part of the Davey Motorsports program and back with KTM. If any of those guys get momentum on their side early, they have what it takes to deliver moto wins and to potentially accelerate ahead in the points. Another interesting factor will be to see KTM Enduro Racing Team’s current E3 off-road champion Daniel Milner behind the gates in MX1 aboard his 350 EXC-F, fresh from dominating last weekend’s opener in Toowoomba, as well as his teammate Lyndon Snodgrass in MX2 on the 250 EXC-F. They’ll be flying beneath the radar for the most part, but if it rains – and it looks like it might – then we could be in for a bigger result than even they expect.

As you can tell, there’s lots to dissect and we’ll have a stack of content between now and when the gates drop, as well as all of the reports, news and information from trackside as it happens. That’s it from me for this week, here’s Jeremy with his take on the week gone by and what’s ahead…

With the pre-season now behind us, I’m stoked for the MX Nationals to get underway this weekend. It feels like it’s taken forever to get to this point, but I’m glad we’re finally here. There’s no more speculation of who’s been doing what or how fast someone is going – all will be determined this Sunday.

I had to report on some more unfortunate news today, and that was Brett Metcalfe being sidelined with injury for the past six weeks. While testing, the former international suffered a crash, sustaining fractures to the transverse process of four vertebrae in his lower back – essentially the wings of the vertebrae.

Luckily, he’s been cleared to ride, however his first time out on the bike will be tomorrow. It’s such a blow to the Penrite Honda Racing rider, who’s endured a pretty horrid run of luck when it comes to campaigning in the MX Nationals. The good thing is he’ll be on the gate and doing his best to score some points, ultimately trying to keep himself in the title hunt – and he is a favourite for the crown. 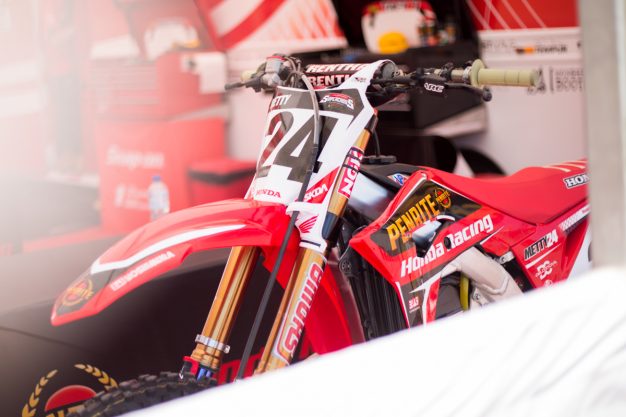 Speaking of the Penrite Honda Racing squad, they’ve got a few major changes in parts suppliers for their MX1 contender. In January, we broke the news that Metcalfe would be switching to KYB suspension with support from American Honda, but today we were able to confirm a couple more changes – the first being a transition to Bridgestone tyres, and the second being the move to FMF exhaust systems.

The switch to Bridgestone tyres is more significant than it seems – the brand was once one of the heavy-hitters in motocross and supercross, however a well over a decade ago, it pulled its support and subsequent major developments in the sport. Bridgestone has still produced exceptional dirt bike tyres throughout that period, but they’ve never graced a factory motocross bike both domestically and internationally until now. It’s a partnership Metty is pretty excited about, and he’s already stated the positive feeling he has with them.

Changes like this aren’t always broadcasted by teams, they’re generally a lot more subtle, just like on this occasion. Picking out switches of sponsors and parts has always been one of the most interesting aspects of a new season for me, and I’m sure there will be many more to notice this weekend.