Metcalfe recovers from vertebrae fractures in time for Appin 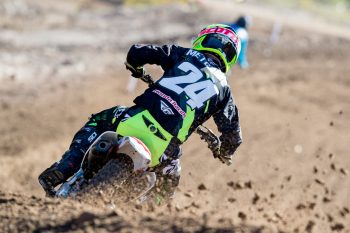 Brett Metcalfe has revealed he’ll line-up for this weekend’s Pirelli MX Nationals season-opener at Appin in New South Wales despite suffering a number of vertebrae fractures in his lower back six weeks ago.

The Penrite Honda Racing talent sustained the injury while testing, and after recently  receiving a doctor’s clearance, he’s set to pilot his CRF450R for the first time since the incident tomorrow in a training session.

While grateful to be in an adequate state to line-up this weekend, the extended period on the sidelines comes as a hinderance to the beginning of his campaign, where he’s considered as a title favourite in the highly-competitive MX1 category.

“I’ve had an injury and it will be six weeks since it happened this Sunday,” Metcalfe revealed to MotoOnline.com.au. “I had a bit of a crash during our pre-season testing and fractured the wings on the four vertebrae in the lumbar spot.

Alongside a switch to KYB suspension confirmed in January, the Victorian-based Honda squad will transition to Bridgestone tyres – marking the re-entry of the brand in motocross with a factory operation – as well utilising FMF exhaust systems.

“We’ve made a few switches this year, Bridgestone tyres being one of them,” Metcalfe added. “It’s pretty cool for the sport to have another tyre manufacturer in the game – it hasn’t been done in a long time in motocross. It’s pretty exciting, and the feeling I had with them prior to the injury was great.

“We’re also using FMF exhaust systems – it’s cool because I was always fairly close with the FMF guys in the States. And then there’s the switch to KYB suspension, which has been really good. Once I get healthy, we’re pretty excited with how we stand and hopefully we see the results on the track.”

It was determined today that the MX Nationals will introduce a new Sprint format for 2019 consisting of two short, back-to-back outings, followed by a traditional moto. The format will alternate between the MX1 and MX2 categories – the premier class set to debut the structure this weekend.