Sprint format to be rolled out at 2019 MX Nationals rounds

First Sprint race to feature in the premier class this weekend at Appin. 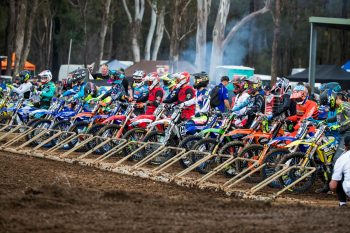 A new Sprint format will be introduced to the Pirelli MX Nationals at select rounds this season, with the first to be rolled out in the premier class this weekend at Appin’s season-opener in New South Wales.

The Sprint format will be applicable to the MX1 and MX2 and will alternate at each round, where two eight-lap back-to-back motos will take place alongside one 16-lap moto in MX1, as the quarter-litre division will also utilise two eight-lap races back-to-back, followed by an 11-lap outing to complete the day.

Sprint format races will be scored as two separate races, then added together to create a traditional single-race score – the highest points score will then be granted normal race points, with first receiving 35 points.

The traditional two-moto format will continue to take place, the MX1 division using a 16-lap structure for both motos, while MX2 will feature a 16-lap encounter followed by an 11-lap moto. Race distances are subject to change following qualifying, where lap-times will ultimately determine the length of each race, while wet conditions could also see the Sprint format reverted.

“The Sprint format rotates – round one it’s MX1, round two is MX2,” MX Nationals promoter Kevin Williams told MotoOnline.com.au. “It’s only MX1 and MX2 – MXD doesn’t change. They basically have two eight-lap races with five minutes in between – the collective points of them equal one moto, which will be followed by a traditional moto in the afternoon.

“We didn’t want to do it every round, the way we’re doing it, it allows the spectators to see a short-course race at every round, and it reduces the work load for teams that have MX1 and MX2 riders.”

The traditional two-moto schedule will be the sole format for the MXD, 125cc Gold Cup, Junior Rookies and YZ65 Cup categories. A similar Sprint format was rolled out last year at Ranch MX’s double-header.