Australian international on his professional career to date.

At a young age Jackson Richardson made the decision to pack his bags and chase his American motocross and supercross dreams. All it took was a taste of the US racing scene as a junior, and the Cairns native had his sights set on a career stateside. Although offers were on the table as he entered the professional ranks in Australia, it was Richardson and his father who decided to take on some of the best riders in the world on a privateer program at just 17 years of age.

“I raced over there a lot when I was a junior, I did some races over there when I was on an 85,” said Richardson. “When I went over and raced with them, I would ride a lot better and win a lot more when I came back here because I had been racing with those guys. I was a top junior guy in Australia and I’d go over there and get obliterated, the guys over there were so much faster.

“It was my first year pro over here and my Dad said why don’t we go over and do some AMA stuff and I was like, are you kidding me? But my parents supported the whole deal and I thought, yeah sure, that’d be sick. As a racer here you always dream of going over to America or Europe, so I was like, hell yeah! I had offers when I was younger to stay over here, but I was just set on going to America and trying to make it there.”

Unlike fellow Aussies before him, Richardson chose not to take the European route before entering the US scene, admitting that heading to Europe is a lot tougher due the large culture change in comparison to the US. Besides the fact that he truly loves living in Menifee, California, the 21-year-old also believes the best riders in the world tend to migrate to the US eventually.

“I mean, I did think about Europe as well, but Europe seemed a lot more difficult to do with the language barrier and all of that stuff,” he explained. “I just love being in America too, I love being in the country and where I live over there it’s basically the motorcycling hub – I just really love being in America. A bunch of the Europeans, once they get championships over there, they all seem to want to come to America and compete there because that’s where the best guys are.” In his fourth year contesting the US professional circuit, Richardson kicked off the 2016 season with other offers, but felt his own privateer program was the best choice overall. Although confident with his equipment, a privateer program brings along increased responsibility and added work, an element of his program that he feels makes racing the AMA motocross and supercross championships much harder.

“It’s pretty tough having to organise everything and setup your own program,” he said. “I did have offers at the start of the year, but equipment wise, I felt the program I had going was a little better than what I had been offered. The hardest part about running your own program is just the organisation, travel and everything like that. I have to drive everywhere in the US, so that makes things a lot harder.”

Sporting his own privateer outfit once again for 2016, Richardson’s season began with a shoulder reconstruction following the opening round of the Monster Energy AMA Supercross Championship, a tough blow for the Queenslander. Entering the Lucas Oil Pro Motocross Championship feeling strong and confident, his season then slowly began to unravel as the gruelling 12 round series went on.

“I got my shoulder fixed and starting riding again, by the time round one of the outdoors came around, I felt really good, he commented. “It was actually the best I had ever felt on the bike fitness wise and everything like that. I felt like I was running the pace of the factory guys, but I had a few issues with crashes and things like that and it really kept me out of some good finishes.

“I think the big thing for me was the fact that you’re racing week in, week out, and you’re driving all over the country. I just started to go downhill a bit over time and the more it went on, the more I struggled. Those guys over there, they start off good and then they ramp it up more and more as the season goes on. It was hard to stick with them and by the end I was just going horrible, I was smoked by the end of the season – it’s insane was those guys over there can do.”

Finishing 29th overall in the 250 Class standings, Richardson made his way back to Australia without plans to contest the 2016 Australian Supercross Championship after talks with Serco Yamaha confirmed a seat could not be organised for the series. That was before Wilson Todd unfortunately injured his hand within weeks of the opening round – it wasn’t long before the phone started ringing and ‘Jatz’ was in. 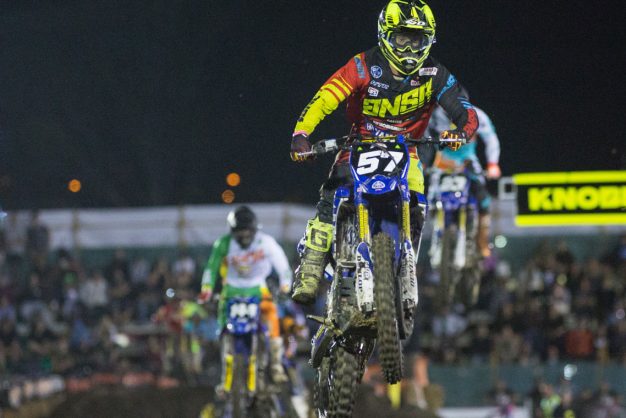 “We were talking about it a little bit while I was over there, but it wasn’t going to end up going ahead initially, which I understood as they already have two guys on the team,” he said. “I came back home and I wasn’t even planning on doing the supercross season in Australia because the season in the US took it out of me a bit. I was actually just hanging down in Brisbane and was going to stay down until Jimboomba to watch, but Wilson ended up getting hurt and I got to the call asking if I wanted to fill in.”

Confirmed to remain with the Serco Yamaha squad for the entire series, Richardson kicked off his campaign with a solid fourth place finish in the SX2 class with just one week on the bike. Meeting his own expectations for the Jimboomba round, Richardson is now focusing on refining the program ahead of Toowoomba’s round two.

“I was definitely happy with it,” he reflected. “After the lead up to the whole deal, I just had a goal of being in the top five for the first round so I could be in the hunt. I’d only had a week on the bike and I kind of rushed into it, so I thought, if I get a top five that’d be really good. I came away with fourth and that was really good.

“I just have to keep telling myself that it’s a good result, because you always want to win. But after everything that happened leading up to that, it was pretty good to come out of it like that. Now we’ve got a couple of weeks off to dial everything in a bit more and be ready for Toowoomba, that break in the series has worked out really well for me.”

What does the future hold for Jackson Richardson following the 2016 Australian Supercross Championship? If the right offer hits the table, we could indeed see the charismatic Queenslander make a fulltime return to the Australian racing scene in either class.

“I haven’t really decided on what I’m going to do, I’ll probably look for something here, but only if it’s a pretty solid deal and worth staying over here,” he added. “If not, I’ll probably go back over and do the American stuff again. I’d do a 250 deal or a 450 deal, I ride the 450 a fair bit so that wouldn’t be a huge deal if I had to jump up to the 450 class.”