McDonald Jones Stadium to host triple crown at round three. 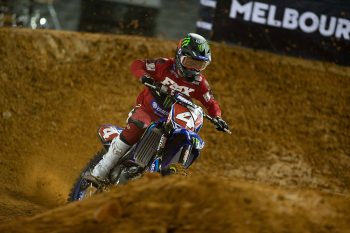 The complete 2022 Fox Australian Supercross Championship (AUSX) calendar has been revealed ahead of its highly anticipated return in October, with the series to be contested over four rounds including a triple crown event at McDonald Jones Stadium, Newcastle.

Round one – as previously confirmed – will take place at Marvel Stadium, Melbourne alongside the FIM World Supercross Championship (WSX) on Friday 21 October.

Eight days later Adelaide Showgrounds in Wayville, South Australia will host round two on 29 October, with the series moving to McDonald Jones Stadium in Newcastle, NSW for round three on 26 November. 2022 marks the first time supercross racing will be staged at McDonald Jones Stadium in over a decade, as a partnership with the NSW Government leaves the potential for the event to continue in 2023 and 2024.

Round three will feature the marquee AUSX Triple Crown – a bespoke race format known as the ‘championship within the championship’.

The championship finale takes place at Wagga International Stadium in Wagga Wagga, NSW on 3 December. This year is the first series since Justin Brayton (SX1) and Chris Blose (SX2) were crowned in 2019.