Four-round 2022 season scheduled to be announced next week. 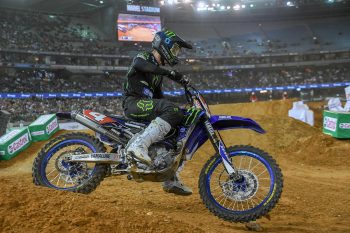 While the complete calendar isn’t due to be uncovered until next week, it’s expected that it will be made up of four rounds that will also include a stop in South Australia, plus two in New South Wales suggested to be in the Wagga Wagga and Newcastle regions.

Minimal information on the series has been communicated by organisers since a preliminary schedule was released in April. At that point, it was indicated that the season would surprisingly span into January next year and also host a round in Western Australia, however, both of those decisions have since been reversed. That also has resulted in the series being reduced from five to four rounds by remaining within the current calendar year.

This season will be pivotal in the ongoing success of supercross at a national level, marking the first series since Justin Brayton (SX1) and Chris Blose (SX2) were crowned in 2019. The pandemic has caused disruptive cancellations of the Australian championship altogether for the past two years.

There has also been a significant change in the commercial rights of the Australian Supercross Championship behind the scenes, with AUS SX Holdings – a company formerly closely aligned with AME Management – no longer in control. Instead, it is the rebranded AME Group that will lead national supercross into this latest era with AME Group general manager of events and commercial, Ben Williams, at the helm.

Part of that process was Adam Bailey and longtime business partner Ryan Sanderson turning their day-to-day attention to SX Global and the high-profile WSX Championship that will launch its ‘pilot’ campaign from this October. While Bailey will continue as director of AME Group, Sanderson’s departure effectively took place in April this year.

Still, the Bailey and Sanderson association remains firm in terms of SX Global, with Bailey managing director – motorsport and Sanderson managing director – commercial in positions that will be instrumental in the future of the WSX Championship. They also previously together created the AUS-X Open and SX-Open Supercross FIM Oceania Championship, in addition to the AME sports marketing agency.

The combined Australian Supercross opening round and WSX Australian Grand Prix – round two of the world championship – will see the gates drop at Marvel Stadium between 21-22 October. Night one will primarily feature the domestic series alongside the first WSX sessions on-track, before night two focuses on the international competition. Local wildcards entering WSX will also be determined during the first night.