Comeback of Crawford delayed beyond round five 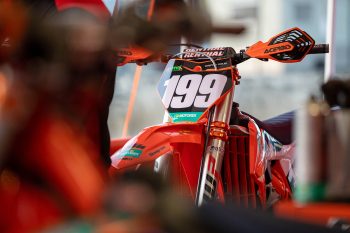 The MX2 comeback of Nathan Crawford will not take place during Penrtie ProMX at Maitland this Sunday, with the KTM Racing Team contender being ’80 percent healed’ from a broken femur suffered in the pre-season.

Crawford underwent surgery towards the end of March, one week out from the 2022 opener at Wonthaggi which ruled him out of the first four rounds of national motocross that spanned across a two-month period.

In the closing stages of May, the 24-year-old outlined a return target of Maitland and resumed riding in a practice environment. Coffs Habour on 24 July will now likely be his first outing on the national stage this year.

“We were aiming to race at Maitland, but I told him [doctor] the next race is at Coffs Habour on the 24th of July and he said that would definitely not be an issue,” Crawford told MotoOnline. “So at this point, returning to racing at Coffs Habour, and then being able to do the last three races of nationals [Coffs Habour, QMP and Coolum].

“I would love to have raced, but better to be safe than sorry and that gives me an extra four weeks. Once we go to Coffs Habour I basically want to be able to run up the front straight away.”

An extra month ahead of round six essentially provides Crawford the time needed to ensure proper recovery, and mitigate any issues that might arise from his femur not being at 100 percent in a racing environment.

“I’ve been back on the bike for over a month now and I built up to being at a pretty good level again, getting back to the practice track with my training crew and being at a competitive speed, all of that sort of stuff,” Crawford added.

“I had my doctors consult on Tuesday and he was super stoked with how my leg is and the progress I’ve made in such a short time. With the femur injury, the baseline is six months, I’m just over three months and I’m doing really well.

“He did say that while practising, I’m sort of in a bit more of a controlled environment than when I am racing 39 other riders. Basically, when I get on the gate with 39 other riders, my risk level sort of multiplies, a lot, and safety kind of lies in the hands of the other riders as well. A first turn pile-up wouldn’t end too well for me.

“I’m not really big on going and risking a big crash at the moment, basically my doctor said that my leg is 80 percent healed, he said you can have little tip-overs but would not necessarily be keen on me having a big crash just yet.”