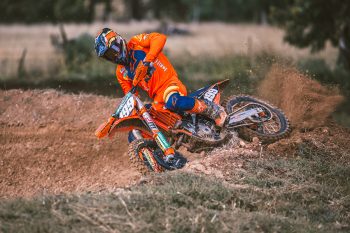 Just one week out from the Pentrite ProMX season-opener, KTM Racing Team MX2 recruit Nathan Crawford has devastatingly broken his femur and will be sidelined for the coming months as a result.

The injury occurred while training at Coolum last weekend and effectively rules Crawford out of MX2 title contention after displaying winning form in the pre-season.

“We’re incredibly disappointed that Nathan has suffered such an injury after an excellent pre-season getting comfortable on his KTM 250 SX-F and building with the team,” KTM Group Australia motorsport manager Kyle Blunden stated. “The best of Nathan is yet to come and we look forward to assisting him through his recovery and back to full speed.”

Crawford underwent successful surgery this week to begin his recovery. A targeted comeback round has not been identified, but with the first four rounds taking place in the next two months it would be a surprise to see the talented Queenslander return before the second half of the ProMX season.

Round one of the eight-round 2022 series begins this Sunday, 27 March at Wonthaggi, Victoria, with KTM Racing Team not expected to immediately draft in a fill-in rider. That leaves Kirk Gibbs as the sole factory KTM entry this weekend.