Recovery time not extended for Honda rider as injuries overlap. 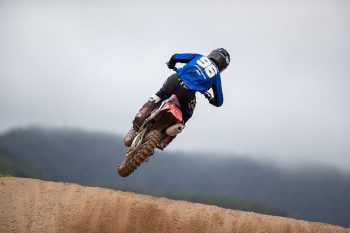 Honda Racing’s Kyle Webster has undergone further surgery to insert screws in his right ankle as he continues to recover from a training crash post round two of the 2022 Penrite ProMX Championship at Mackay.

Webster broke his left foot and right ankle in the fall, and initially went under the knife to insert two screws and a bone graft on his left navicular which by his own account ‘went well’.

With the latest operation being on his right ankle, it means additional recovery time is not required as both injuries effectively overlap.

“My left foot, which was the bad one originally, turned out to be really good so I was back up on my feet for a couple of days,” Webster explained to MotoOnline. “When I went and got the check-up, they checked my right foot again, and unfortunately didn’t quite heal as well as we thought.

“They wanted to put a screw into it, which is fine, it is basically to stop it moving. While they went in there and did that I had a lot of old floating bones from a break years ago so they just had to clean all of that up, which is definitely better long term, but a bit annoying now.

“It shouldn’t extend my recovery time from what it was going to be, it will just overlap my left foot now.”

No return date has been announced by the number 96, as round five of ProMX takes place at Maitland, NSW next Sunday.