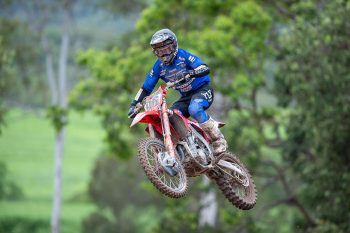 A return date to competition is to be confirmed for current ProMX red plate-holder Kyle Webster, the Honda Racing rider undergoing surgery last week which included a bone graft in his left foot.

Webster crashed while training post-Mackay when his bike malfunctioned, breaking his left foot and right ankle in the fall. The graduating MX2 champion was operated on last Thursday.

“The surgery went well,” Webster explained to MotoOnline. “I ended up with two screws and a bone graft on my navicular. It’s alright now, it’s not really sore anymore which is nice, but I can’t really weight bear or anything on my left foot.

“Luckily my right ankle is broken, but I can put a bit of pressure on it, so I can still kind of get around which is nice.

“I really don’t know [return date to competition], because I’ve never had a bone graft before. I can imagine it won’t be too quick. I have a follow-up appointment on Friday this week, I’m sure I will find out a little bit more I guess, and see how it is travelling along.”

Webster’s absence from competition at Wodonga’s round three this weekend means he will effectively relinquish the red plate. The number 96 currently holds a six-point advantage in the MX1 standings after claiming the overall victory at Mackay, where defending champion Luke Clout crashed in race one and sustained a broken leg.