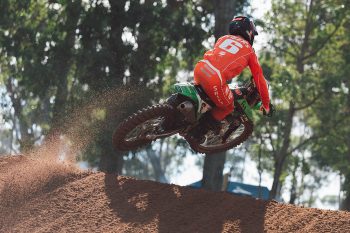 Empire Kawasaki’s Jayden Rykers has shared his views on that incident with Aaron Tanti in the second Allstars moto at the 2022 Berry Sweet Manjimup 15,000, believing his move being labelled dirty is unjust.

Rykers was determined to hold onto a podium position in race two as CDR’s Tanti charged through to recover from a crash earlier in the moto.

In a battle for third on the final lap, Tanti made a pass on Rykers before the number six responded and countered in the next corner, ultimately seeing Tanti go down and costing him any chance of the overall after remounting for P8.

“With the incident with Aaron, I’m confident in that I just caught him off-guard,” Rykers said to MotoOnline. “I know he said in the previous interview that it was a dirty move, but when you are talking about passing, a dirty move is something along the lines of what [Justin] Barcia does where his front wheel is meeting the footpeg of the other riders.

“In that situation, his front wheel was near my back wheel and, by the time he noticed, I already had my bike on the inside line where there was a gap. I just believe it caught him off-guard, he lost balance and fell over and I think he was also a little bit frustrated that it was the second time he had crashed in the moto, he had made his own mistake earlier.

“Being the last lap of the race, being in the podium position, I could not continue to give that up too easily and I needed to respond straight away – I went for it and he got caught off-guard. As a lot of people that have commented who were at the event, they believe it was a fair move.”

Tanti wasn’t pleased with the incident and thought the pass could have been made cleaner. He missed the overall victory by a single point with that second moto being decisive, while Rykers finished fourth overall in Allstars and third in the Shootout.

“The weekend was pretty good for me, I managed to get fourth overall for the day,” Rykers added. “First moto I wrapped my gear-shifter around my footpeg, just hitting the side of a track marker, so started the day a little bit slow with a sixth, then I went 3-4-4 in the final three motos. In the Shootout I managed to get into the final three through the elimination process, so it was a good day.”

The pair will return to the national stage later in the month at Maitland, NSW, for round five of the 2022 Penrite ProMX Championship – the MX1 standings currently led by Tanti – on 26 June.