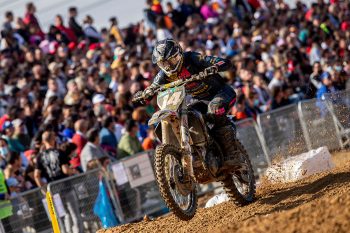 Putting in two solid performances in Spain, Jed Beaton proved consistency is key as he was able to land third overall in MX2 courtesy of 4-4 results.

Beaton, 23, made a good start in the opening moto before being pushed wide in turn two, relegating him to eighth position.

The Rockstar Energy Husqvarna rider swiftly moved through the field in the following laps, reaching fourth by lap seven where he ultimately finished the race.

A better opening lap in moto two saw Beaton slot into fifth position, before passing teammate Kay de Wolf on the second lap elevating him to fourth. From there the Australian was unable to reel in the top three, securing another fourth position and 36 points for the round.

“It’s been a good day but in both motos, I was pushed wide in the second turn which cost me a few positions in both races,” Beaton explained. “I had good starts, stayed tight around the first turn but then that set me up on the outside for turn two.

“I made things happen quickly in both races which I’m really happy with, but by the time I got into fourth the top three were just a little out of reach.

“It’s nice to be back on the podium, though, for myself and the team. We’ve all been working really hard so to get back on the box makes it all worthwhile.”

Beaton’s Spanish scorecard makes it six out of the last seven races where he has finished inside the top five. This consistency has helped him solidify P5 in the world championship standings, 31 points clear of Red Bull KTM Factory Racing’s Rene Hofer.

With five rounds remaining in the 2021 world championship season, the Australian is sure to be looking to lift his solid run of results to multiple podium finishes and potentially an elusive MX2 overall victory.