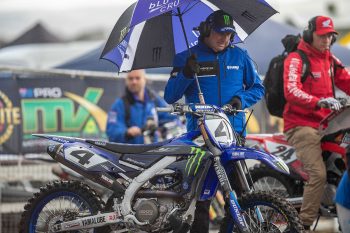 CDR Yamaha owner Craig Dack has hailed Luke Clout for his 2021 Penrite Pro MX title win, drawing positives from the condensed season and the way in which it was won.

A mechanical DNF in moto two at Wonthaggi’s opener left Clout with work to do – 23 points down on Regan Duffy (KTM Racing Team) at the time.

However, the New South Wales rider regrouped to score a perfect 100 points in the next four races, earning him the red plate after Maitland and ultimately the championship by just three points.

“The way Luke won it, winning it by three points after he had a mechanical DNF in one of the motos, so out of the six points-scoring races he dropped a moto and was able to get that back in three rounds and do it by the skin of our teeth,” Dack told MotoOnline.

“Maitland was about a day or two from being locked down. If Maitland didn’t run, well you’ve got to complete three rounds or more for it to be declared, so when you look at all the different angles it’s a really, really good win for us.

“Luke had everything against him following that first round and his determination and winning spirit just kept pushing through. We will notch it up as a good one – so many positives to draw out of it.

“If you look at Luke as well, he went to Manjimup and won as well… that’s never an easy event to win, especially against the likes of a good sand rider like Duffy [Regan Duffy]. Luke has just shown he’s now the guy to beat, he’s the class act of the sport in Australia at the moment.”

Clout will return in CDR Yamaha Monster Energy colours in 2022 – the second of a two-year contract – to defend the MX1 title on-board the factory-backed YZ450F. His title was CDR’s first since Dean Ferris won his third-straight in 2018.