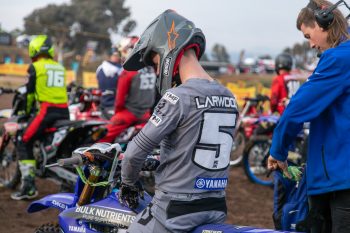 WBR Yamaha Race Team’s Alex Larwood has been forced to the sidelines after suffering another injury blow, which will see him miss Maitland’s fourth round of the 2021 Penrite ProMX Championship on 27 June.

The South Australian, who recently overcame a shoulder injury after dislocating it at Canberra, suffered a cracked femur while practicing in Victoria last week.

The MX2 rookie believes he’ll only miss the Maitland round, however following Motorcycling Australia’s recent announcement of the rescheduled Gillman stop on 11 July, he could be in doubt for his home race.

“I have another injury now – I’ve cracked my femur,” Larwood declared to MotoOnline.com.au. “I’m going to miss the Maitland round of the ProMX championship, but hopefully I should be back for the next round after that, and for the rest of the championship. It’s only a small crack, so it should only be four to six weeks before I’m back, hopefully.

“The crash happened last week while I was practicing at Wonthaggi. There’s an inside rollover in a corner and I landed into the face of that. It wasn’t a big crash or anything – it was just an awkward landing.

“I was nearly back to 100 per cent from my shoulder injury and was back into the full swing of things, so it’s definitely frustrating. I’m not having a good run at the moment.”

Larwood made a promising start to his maiden MX2 campaign, earning a podium on debut at the Wonthaggi’s season-opener.