South Australian round set for mid-July subject to travel restrictions. 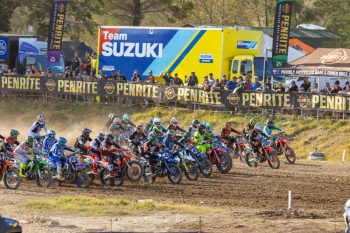 Motorcycling Australia (MA) has a set tentative date for Gillman’s third round of the 2021 Penrite ProMX Championship after it was postponed last month, which will see it slot in between the Maitland and Wodonga rounds in mid-July while being subject to South Australia’s border restrictions.

The event was initially called off following the outbreak of Covid-19 in Victoria, where South Australia went on to impose travel restrictions that would prevent a large number of competitors and personnel from entering the state.

MA has always insisted the round would be rescheduled rather than cancelled, with 11 July being the newly-established date for the third round. However, in the event the race can’t proceed due to ongoing travel restrictions, a backup date set for 19 September could see the series finish a month later than scheduled.

This would also impact rider preparation for the upcoming Australian Supercross Championship, which is pencilled to commence on 16 October – reducing the time between the two championships to just one month.

MA is set to confirm if the 11 July Gillman round will proceed by 25 June, while the next stop on the calendar is Maitland in New South Wales on 27 June.