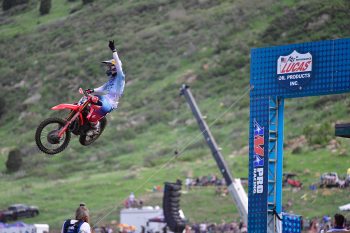 Team Honda HRC’s Ken Roczen notched a perfect day in Colorado, going fastest in both qualifying sessions before sweeping the day with 1-1 moto scores to take the overall at Thunder Valley.

Round two of the 2021 Lucas Oil Pro Motocross series saw Ken Roczen find his groove as the German-born rider dominated in all four of his appearances on track today en route to the lead in the championship standings.

In moto one, Adam Cianciarulo put his Monster Energy Kawasaki at the sharp end of the field with Ferrandis in tow. Roczen carved his way through to the lead on the opening lap, and lead the opening 10 minutes ahead of Cianciarulo and Ferrandis.

Cianciarulo then made an aggressive pass on Roczen for the lead and looked to be taking control at the front, as Ferrandis then found his way by 10 minutes later, and set his sights on the leader.

As the clock ticked down to five minutes left, Ferrandis made the pass for the lead with some contact, then checked up Cianciarulo in the following corner letting Roczen close in.

Roczen made quick work of Cianciarulo as Ferrandis gapped them, but with two laps to go, Roczen attempted a pass up the inside for the lead, the Yamaha rider sitting up and going off track, giving the eventual win to Roczen.

As the gate dropped on moto two, the final holeshot of the day went to the Red Bull KTM duo of Cooper Webb and Marvin Musquin, but both riders were passed quickly by a charging Roczen, with Cianciarulo in tow and Ferrandis down in ninth.

Cianciarulo would hit the ground early, dropping him to seventh, while Roczen checked out at the front. Ferrandis charged, eventually finding himself in second in the back half of the race, unable to track down Roczen.

Roczen went on to win by nearly nine seconds ahead of Ferrandis, with Justin Barcia (TLD Red Bull KTM) taking third in the moto. The overall on the day went to Roczen, with Ferrandis second and Cianciarulo third.

Barcia’s 7-3 finish on the day put him fourth overall as the GasGas rider looks to continue building momentum and stay in the championship fight.

Aaron Plessinger (Monster Energy Star Racing Yamaha) showed plenty of speed as he continues to impress in 2021, running up front all day and challenging Barcia for the podium in moto two. He’d go on to finish fifth overall with 5-4 moto scores.

Sixth on the day was Chase Sexton (Team Honda HRC) after swapping scores with Plessinger for 4-5 finishes.

He finished just ahead of Christian Craig in what was another impressive outing for him on the Monster Energy Star Racing Yamaha 450 with 6-7 on the day. Craig continues to round the corner on recovering from a leg injury sustained in Supercross.

Defending 450SX champion Cooper Webb took eighth with 8-8 moto scores ahead of teammate Marvin Musquin with 9-9 finishes as the Red Bull KTM squad look to find some speed in the two-week break ahead.

After a rough start to the season, things didn’t get any better for four-time champion Eli Tomac in his hometown race, as he went 11-10 for 10th overall in Lakewood.

Roczen now leads the championship into the two-week break, just one point up on Ferrandis as the series moves to Mt. Morris, Pennsylvania on 19 June for round three at High Point. Monster Energy Star Racing Yamaha’s Justin Cooper notched a pair of second places that took him to the overall victory at round two of the 2021 Lucas Oil Pro Motocross Championship at Thunder Valley.

Despite a fourth place in the opening moto, Jett Lawrence (Team Honda HRC) took the win in moto two to retain the points lead, as moto one winner Jeremy Martin (Monster Energy Star Racing Yamaha) would DNF moto two after taking the moto one win.

Lawrence now leads the championship by nine points over Cooper as the series heads to High Point in Mt. Morris, Pennsylvania.

In the opening moto of the day, Martin grabbed the win after running teammate Cooper down at the 16-minute mark to take the lead and set out for the win in a Star Racing 1-2.

RJ Hampshire repeated his moto one performance from last week by taking a hard-fought third place as he chased the Star Racing duo at the front for much of the moto to no avail.

As the gate dropped for moto two, Cooper grabbed the lead while Martin got sideways out of the gate and rounded the first lap in 17th.

Things went from bad to worse early in the moto for Martin as he charged through the pack. He’d crash hard and wind up in the mechanic’s area, eventually going on to DNF the moto and take eighth overall on the day.

At the front meanwhile, Lawrence made an aggressive move on Cooper for the lead and would sail on to win by over 15 seconds.

Cooper’s second-place would lock in the overall for the day, with Hunter Lawrence’s (Team Honda HRC) 5-3 scores giving him third place overall on the day.

Garrett Marchbanks (Club MX Yamaha) had a solid day with sixth overall. While starts seem to be holding him back from better finishes, he charged to 7-7 on the day.

Jalek Swoll continues to have a solid start to the season aboard his Rockstar Energy Husqvarna, the Floridian notching 10-6 in the two motos.

Perhaps the ride of the day went to Dilan Schwartz who finished ninth overall. The BarX Chaparral Ecstar Suzuki rider putting up 8-12 scores.

Hampshire went on to finish 10th overall after his third place in moto one. His second moto took a turn when he hit the ground hard, eventually finishing 19th in the moto.

The championship now heads to Mt. Morris, Pennsylvania in two weeks’ time, as riders are set to take on the iconic High Point Raceway on Saturday 19, June. 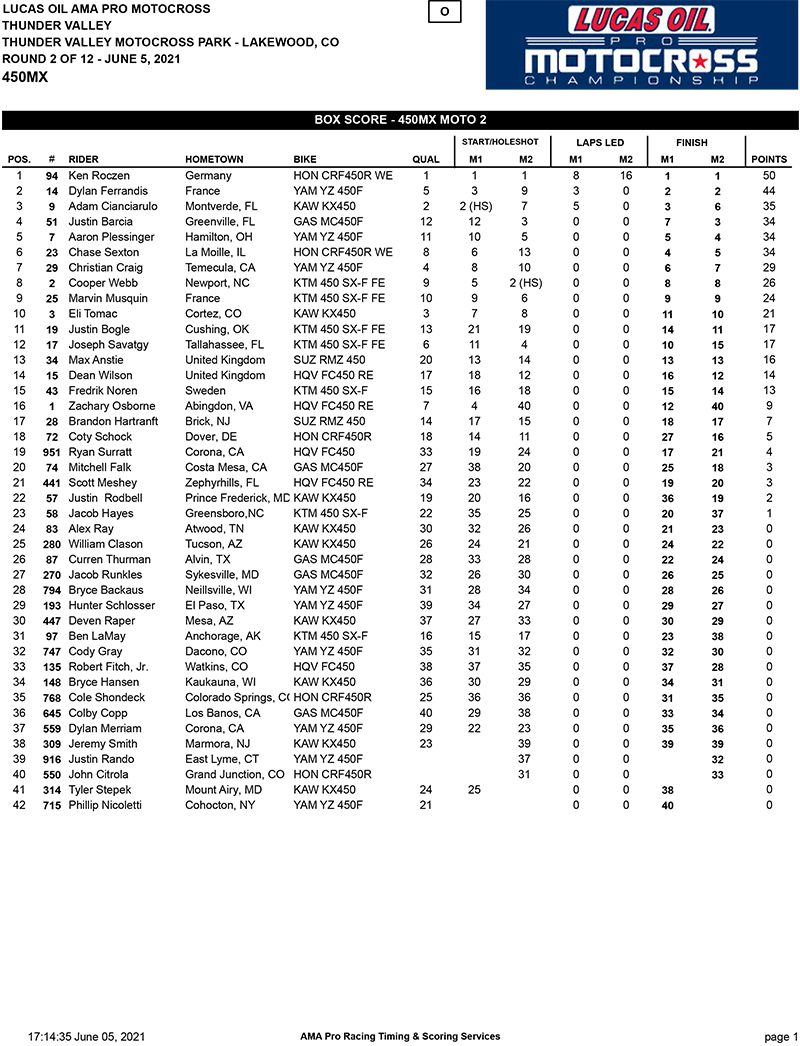 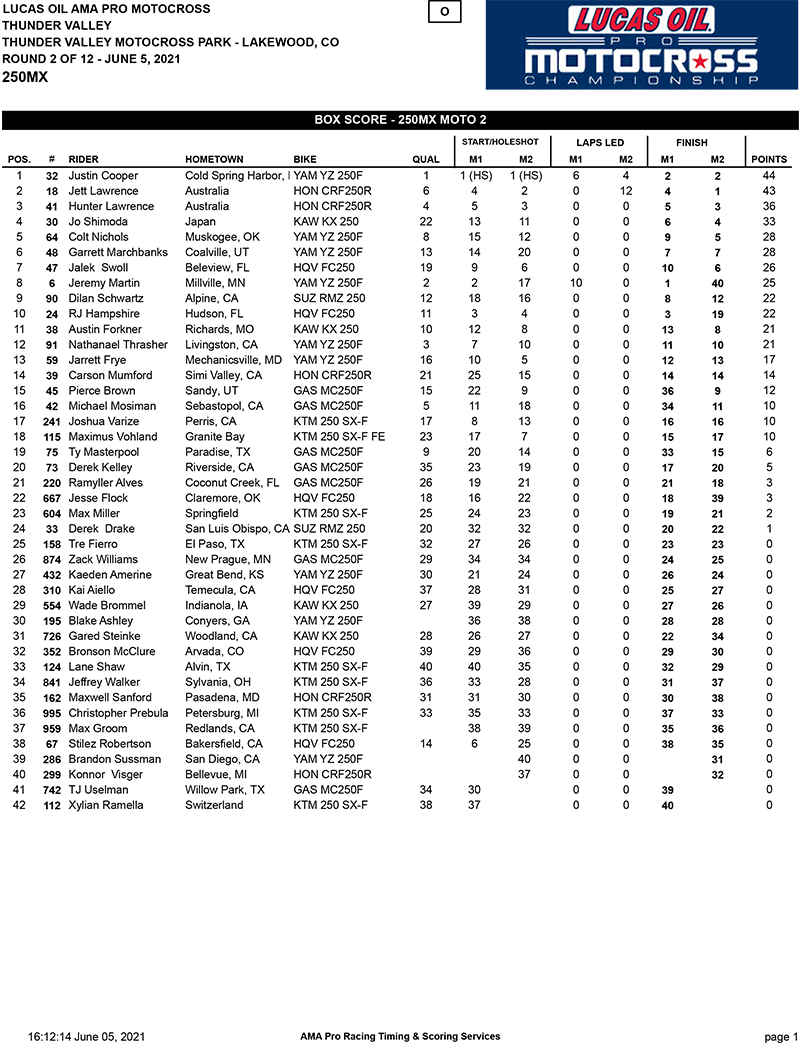