Scotsman has rediscovered his love for racing in first ProMX Championship.

Two years ago, Jay Lamb was done racing motocross and left his home country of Scotland to travel around Australia with his girlfriend. Now, the 24-year-old is back racing and is sitting 10th in the 2021 Penrite ProMX Championship in the MX1 class. MotoOnline caught up with him and asked Five Questions on his journey so far. 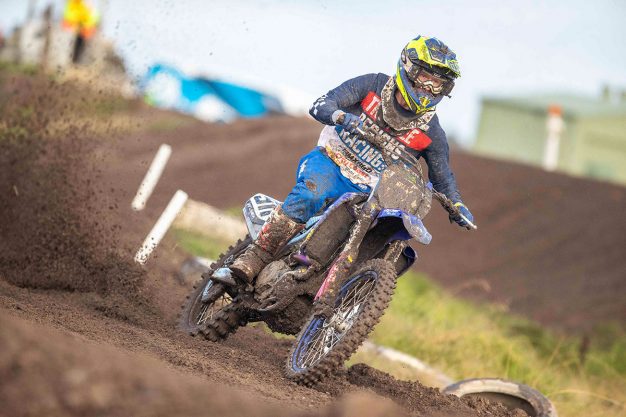 Why did you move to Australia and decide to race the ProMX championship this year?

I raced MX1 at a pro level in Scotland in 2017 and got some top 10 results as a privateer, but at the start of 2018 I got injured and fell out with the sport. I called it a day as it cost too much as a privateer. My girlfriend and I decided to come to Australia to travel and for a bit of a holiday and I found a job apple-picking in WA. I went and watched the Manjimup 15,000 in 2019 and thought ‘man, I need to race over here’. And that was it – we decided to base ourselves in NSW as it’s so central for the sport and spent the rest of the year working and saving money to race. Once you’ve raced motocross at a high level, you can’t get away from it – I don’t feel like I fulfilled my potential as a racer and I don’t want any regrets. I was planning on racing the MX Nationals last year, but obviously that didn’t happen. I still raced the East Coast MX Series and some local races in 2020, which helped me get back into the groove of it again.

Where are you based now?

I live in Shellharbour and I love the coastal lifestyle… living by the sea and the good weather makes you want to get out for a run, go exploring and make the most of every day. I’m originally from Hawick, which is on the Scottish side of the England-Scotland border, 30 minutes from Edinburgh, so it’s cold and wet most of the time there. I reckon the Australian winter is still better than the Scottish summer!

How have you found the racing in Australia?

I have to say Motorcycling Australia do a very good job of running the ProMX Championship. It’s very professionally managed and the livestream means my parents can get up at 3:00am to watch the racing. Dad loves the sport so much and it breaks his heart to not be here at the races with me. On the track, the talent runs deep in the MX1 pack and it’s pretty similar to back home in that respect. Obviously the top five or six guys are a bit quicker, but the pace from sixth through to 15th is pretty similar. Back home I think there’s some more variety in the track surfaces and, being based in NSW, I tend to ride a lot of hard-pack tracks. Wonthaggi definitely wasn’t hard-pack, though, and I think it’s the most fun track I’ve ridden in Australia so far. I’m a bit gutted on my results there in 12th overall, as I was under-prepared for the soil, but I think if we go back there next year I’ll do a lot better. What’s been the biggest learning curve for you?

Probably learning to be independent. I don’t have that same help or support from my family that I had when they lived nearby – here in Australia it’s just myself and my girlfriend trying to live the dream. Every penny we make goes back into motocross. I’m a carpenter building new houses around Shellharbour and I have a great relationship with my boss, who allows me to take time off to work and train. Not many bosses do that, so it’s a huge help and I’m grateful that he’s so flexible.

Who’s in your corner over here?

My girlfriend, Carmen, is so supportive. We’ve been together for seven years and after we watched Manjimup in 2019 and I said I wanted to go racing again, she was so supportive and encouraged me to get back out there again. Luke Sanderson, who owns the MXR&D workshop is my mechanic, and I ride and train regularly with Matt Moss, Jy Roberts and Ryan Findanis. All of those guys have been really supportive and welcoming and helped make my childhood dream of racing motocross in Australia come true.