Setting the stage for the upcoming 2020 outdoor season.

As recently as a month ago, we still had no idea as to if or when we’d be going racing for the 2020 Lucas Oil Pro Motocross Championship. Schedules were announced, pulled, juggled and shuffled as the promoters, MX Sports Pro Racing, weaved through coronavirus-related restrictions that changed state-by-state and by the day. But, for now at least, we have a championship somewhat set in stone. With the outdoor series looking vastly different to what we’ve ever seen before, MotoOnline outlines some frequently asked questions. Q: What’s the latest with this year’s championship?

A: As it sits right now, we’re going to see nine rounds of racing at eight venues, between 16 August and 11 October. For the first time ever we’ll see Loretta Lynn’s host a round of the championship, which riders wouldn’t have ridden since their amateur days. The rest of the series will see racers return to regular circuits, but in a vastly different order than what they have done in the past. There are strict health requirements and regulations that the industry, teams and media will have to abide by, but everyone is eager for the championship to go ahead and will do all possible to make it work. A shortened 18-moto series isn’t the ideal outcome, but the fact that we’re going racing at all in this current environment is a major plus.

Q: Could the calendar change again or is it now guaranteed?

A: Unfortunately, despite the best efforts of everyone involved, there are no guarantees that we won’t see further changes to the schedule. We certainly hope we don’t, but we’re in the middle of an unprecedented crisis and the situation remains extremely fluid. The organisers are monitoring the situation closely and are in constant contact with the state authorities to ensure racing can continue, but there’s remains a strong possibility that further alterations to the championship could be required.

Q: Which rounds won’t we see this year?

A: In contrast to the fascinating addition of Loretta Lynn’s to this year’s championship, the current pandemic has claimed a heap of scalps, with some of the favourite, regular rounds of the series already cut from the schedule. The venues that have been axed include the traditional opening round at Hangtown, plus fan favorites High Point, Southwick, Unadilla and Budds Creek. We’re hoping they’ll be back on the regular calendar again next year.

Q: Will there be spectators?

A: Yes, but only at select rounds at this stage. Fans are able to buy tickets for Loretta Lynn’s, Ironman and WW Ranch in Florida, with tickets for remaining rounds becoming available as the situation allows. Currently there will be no spectators at Washougal or the double-header at RedBud. For rounds that do allow spectator access, there will be strict rules in place regarding the use of face-masks and the pits and podiums will be off-limits. All rounds of the Lucas Oil Pro Motocross Championship will be televised on NBC, NBC Sports Network, MAVTA, and streamed live on the NBC Sports Gold subscription service.

Q: Why are there two rounds at RedBud?

A: The traditional home for 4th of July motocross, 2020 sees RedBud fall on Labor Day weekend instead. MX Sports Pro Racing has taken the opportunity to use the long weekend to squeeze in two rounds on 4 and 7 September. The initial calendar had the double-header on 5 and 8 September, but the decision was made to shuffle both dates back 24 hours to better accommodate the needs of the competitors, as well as to better fit NBC’s TV broadcast schedule. 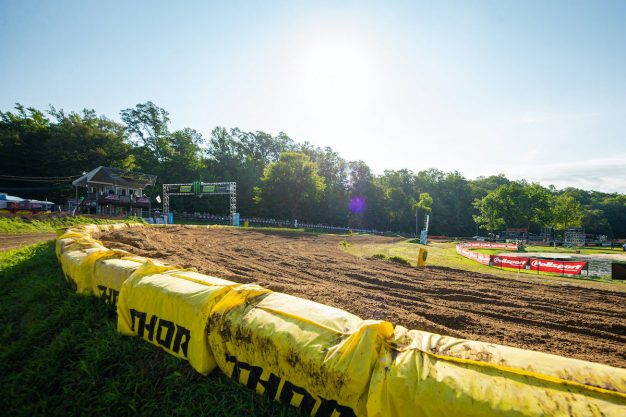 Q: Why has Ken Roczen pulled out?

A: Even though Ken Roczen finished the Monster Energy Supercross championship on a disappointing note, this week’s announcement that the Team Honda HRC rider would be a non-starter for the entire championship came from left-field. Citing the upcoming birth of their first child and the ongoing health issues that have plagued him for the past couple of years, Roczen said he was ‘confident it’s what’s best for me and my team in the long run. It will be good to regroup, let my body heal, enjoy this important experience with Courtney and build back up for 2021’. Geico Honda regular Christian Craig will fill Roczen’s spot in the 450 class.

Q: Who else won’t be lining up for the championship?

A: Despite the uncharacteristically lengthy break between the indoor and outdoor series, there are a number of racers who will miss at least the start of the championship. In the 450s, Aaron Plessinger will miss most, if not all of the series after breaking his wrist in a practice crash at Pala last month, so Broc Tickle has been subbed into the Monster Energy Yamaha squad as a replacement. The 250 Class has a longer list of non-starters, including Colt Nicholls (Monster Energy Star Racing Yamaha, hand injury from Supercross) and Monster Energy Pro Circuit Kawasaki trio Austin Forkner (spleen and pancreas removal), Jordon Smith (ACL) and Garrett Marchbanks (MCL, PCL, liver and lungs) are all still recovering from injuries sustained during Supercross. Instead, Mitchell Harrison and Darian Sanayei will join Cameron McAdoo on the Pro Circuit team.

A: On the face of it, Monster Energy Kawasaki’s Eli Tomac is certainly the hot favourite to claim his fourth-consecutive Pro Motocross title, especially since he’s high on confidence after finally wrapping up his first 450SX championship and is always frighteningly-fast outdoors. Still, don’t be surprised if it doesn’t come as easily as what some are predicting as Marvin Musquin is back to 100 percent from his knee injury, Cooper Webb is always a threat and Zach Osborne is riding a wave following a strong finish to the Supercross season. If you then add Jason Anderson and Adam Cianciarulo to the mix, ET3’s 2020 championship double isn’t even close to being guaranteed.