Frenchman to join Desalle in factory Kawasaki Racing Team from 2020. 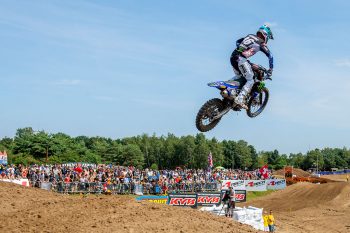 Former MXGP world champion Romain Febvre’s move to Monster Energy Kawasaki Racing Team from 2020 has been made official, the Frenchman signing a multi-year contract to pilot the factory KX450.

The 28-year-old will transfer from Yamaha to Kawasaki alongside Belgian Clement Desalle, who will remain with KRT next year for a fifth-straight season.

“We turn to a new page, but the book is still open and there is a new adventure on the horizon!” Febvre commented. “I’m very happy with this choice – it’s never easy to change after five years on the same team, but I’m sure this is the best moment to do it.

“My injury late this season will delay my first days with the team, but I will be even more motivated later this winter when I can get back on a bike again – everyone in the team is highly motivated and I’m impatient to be with them and on the bike.”

Febvre is currently recovering from the broken femur he sustained at the Swedish round of MXGP. Prior to that in 2019 he took a double victory in the Czech Republic for the overall, won four motos in total and earned five GP podiums.

“As far as my injury is concerned it’s taking a long time, of course, but everything is going as planned by the medical staff,” he explained. “I will soon have the first examination six weeks after surgery – we’ll see how it is with the femur and we’ll be able to make our plans for the rehabilitation.

“I will take a longer winter break than usual, but patience is the only option and I don’t want to endanger any stage, so I will be able to start testing in good conditions and to open this new chapter of my career on a good basis. The team is 100 per cent behind me, they have a strong experience of racing and I’m sure we’ll achieve great things together.”

KRT team owner Thierry Chizat Suzzoni commented: “We are very happy to welcome Romain to the team alongside Clement. Both have a lot of experience and I’m convinced that they will join forces to cooperate and get the best from our Kawasaki – it’s a great bike which both of them will want to put on the podium.

“We know that Romain always gives 100 per cent and we confidently expect that both he and Clement will put the bike in the leading pack. It gives us great satisfaction to see one of this season’s GP winners so enthusiastic to join us. We are confident that the new KX450 has a huge potential. It’s a winning bike and we now have two GP winners on the team to show that to the world.”