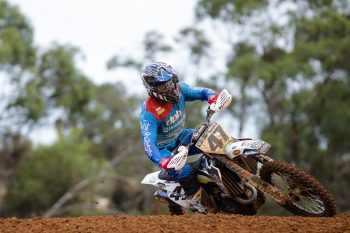 DPH Motorsport Husqvarna’s Todd Waters is anticipating a thrilling chase to the MX1 title as the Pirelli MX Nationals embarks on the second half of the series this weekend at Gympie in Queensland.

Waters has just come off a brief stint in America, where he utilised the six-week break in the championship to race the opening three rounds of the 2019 Lucas Oil AMA Pro Motocross Championship.

The popular Queenslander has highlighted the depth of excitable talent inside the top five, which has boosted his enthusiasm upon return in Australia.

“I’m super excited to get back and race the guys here,” Waters told MotoOnline.com.au. “We have a high level of racers – there’s young Luke Clout – I’ve been teammates with him a few years ago – he’s an excitable rider, fun to race and he’s leading the championship.

“We’ve got Hayden Mellross who’s had the red-plate most of the time and riding really well also, then we have Kirk Gibbs, Jesse Dobson and a bunch of guys who can win races, which makes it exciting.

“I’m really excited to get back racing the MX Nationals, I feel there’s a deep field in the top five, I feel I’m prepared for the last half, and I’ll try go for this MX1 championship.”

The factory Husqvarna pilot, who has won the most MX1 motos in 2019, sits third in the championship rankings, 10 points shy of series leader Luke Clout (CDR Yamaha Monster Energy).