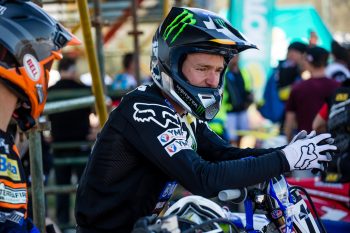 Three-time Australian champion Dean Ferris admits he almost contemplated a return to the Pirelli MX Nationals during a quiet period of negotiations in cementing a deal in the Lucas Oil Pro Motocross Championship, however he’s relieved to have remained patient as opportunities now present themselves.

Speaking on this weekend’s MX Nationals opener at Appin in New South Wales, Ferris says it’s strange to not be lining up for the highly-anticipated event, although focusing on a new-found career path has allowed him to overcome the angst.

“It’s kind of strange actually,” Ferris told MotoOnline.com.au. “I guess at some stage I had a fear of missing out, but I just had to realign my focus and know that I’m going onto different things now and make sure I keep going in that direction.

“Up until recently I didn’t really have anything on the go, so I almost contemplated coming [back], but I’m glad I’ve hung in there and some opportunities have come up now. It’s definitely strange not being there, but I’m also excited with where my career is going.”

The popular New South Welshman, who’s been linked to a fill-in ride in the MXGP World Championship for the time being, recently made a brief trip to America, and his since returned to finalise his visa and maintain a regular training schedule.

“I’m still working on it right, and there are still quite a few weeks until the nationals start there, so there’s no reason to panic,” he continued. “I’ve come home to sort out my visa and continue riding to make sure I’m in shape if anything comes my way.

“I just needed a good set-up quick-smart, so I just pulled my ’16 [championship bike] out of the shed and started riding it. I could’ve got a bike from Yamaha – our relationship is still really good – but that was the quickest and best way to get some laps under my belt. It’s really cool to ride my old bike and compare it to the latest model and see how Yamaha has improved.”

Ferris rode for CDR Yamaha Monster Energy from 2016 through to 2018 after a lengthy stint in Europe and briefly in America, earning the premier class crown in all three seasons he campaigned in domestically with the powerhouse squad.