Factory Yamaha rider injures heel at the 10th round of supercross. 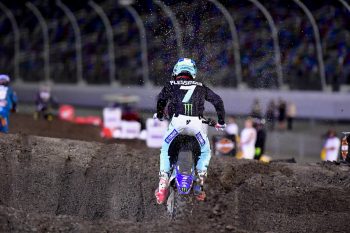 Aaron Plessinger has been sidelined after injuring himself in a heavy fall during Daytona’s 10th round of the 2019 Monster Energy AMA Supercross Championship.

The Monster Energy Yamaha Factory Racing rider made a critical error while negotiating a rhythm section, forcing him to eject from his YZ450F.

The impact upon landing subsequently resulted in a broken heel, which was later determined when the 450SX rookie was transported to hospital.

“Well, as everyone seen I had a little get off in the main tonight, ended up breaking my heel,” Plessinger said in a social media statement. “Not much info right now, just X-rays, but I’ll keep y’all updated.”

Plessinger’s recovery time is still to be confirmed, however the injury now wipes out Yamaha’s factory line-up for the time being, with teammate Justin Barcia still not cleared to ride after suffering a concussion.