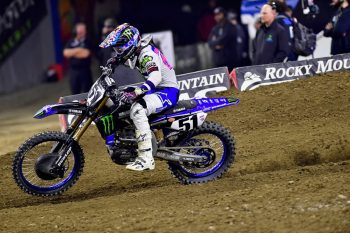 Monster Energy Yamaha Factory Racing has confirmed Justin Barcia will sit out this weekend’s ninth round of the 2019 Monster Energy AMA Supercross Championship in Atlanta.

It’s understood the number 51 experienced an incident while practicing at his training facility in Florida, prompting him to undergo a medical evaluation at the Tallahassee Orthopedic Clinic (TOC), where he was assessed for a concussion.

“The news of Justin’s accident this morning is a real pity, but our main concern is Justin’s health and recovery,” said Monster Energy Yamaha Factory Racing team manager Jim Perry. “Following the concussion protocol, we hope that Justin will be back to 100 percent and cleared to participate soon.”

Barcia, who won the opening round of the series at Anaheim, currently sits sixth in the championship standings. Red Bull KTM Factory Racing’s Cooper Webb holds the red-plate over Ken Roczen (Team Honda HRC) heading into the weekend’s round.