Factory Kawasaki talent just shy of the podium in Argentina. 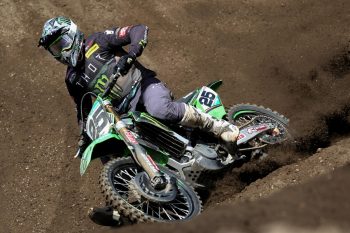 Clement Desalle has piloted the all-new 2019-spec Kawasaki KX450-SR to fourth overall in its maiden MXGP World Championship outing at Neuquen in Argentina over the weekend.

The Monster Energy Kawasaki Factory Racing prepared machine boasts a major overhaul and significant upgrades from its predecessor, already proving its worth on the world stage.

Desalle, a long-time Kawasaki contender, recorded a 4-6 scorecard, forced to come from last in the final encounter to finish just two points shy of the overall podium.

“It was a solid weekend and it was great to be back racing GPs as you can’t find these conditions when you train,” said Desalle. “We saw that we have a great new bike and Julien proved the performance at the starts. I scored a fourth position in the first moto – the rhythm was really high and I finished not so far from the top three.

“I’m just disappointed with the second start – I had a good jump off the gate but they ripped the ground in the first corner and I was surprised in a rut and touched handlebars with another rider.

“I was last but I came back to sixth, which is not so bad as my front brake lever was bent in the crash. It’s good to be going back home fourth in the series – we now have three weeks to work on small details we have learnt at this first GP.”