While most teams in the Pirelli MX Nationals paddock pick and choose their riders, KSF Suzuki Racing elected to take an alternative route for 2019, hosting a selection event and evaluation process for one rider to win the ultimate prize of $100,000 of support. With the process now completed, and three riders selected to be supported in different capacities, MotoOnline.com.au tracked down team owner Scott Fischer to delve into the workings of the unique program. You obviously had the selection event at the beginning of the year, how did you come to conclusion of two riders?

Throughout the trials, we looked at our criteria which included speed, endurance, fitness, mental approach, interaction and social interaction within the team. We selected the riders, Justin Rodbell and John Prutti. We were looking for something different than to just pick up anybody who was on the market, and we did approach a few riders, but they decided they didn’t want to ride outdoors.

Now that the riders are determined, how does everything else fall into place in terms of classes, sponsors and everything that goes with it?

We’ll field a MX1 team only this year, and we’re proud run Suzuki again this year as KSF Suzuki Racing, but we’ve also teamed up with MXstore, and we have a bit of a different concept with them that no one else has done – we’ll represent MXstore and the brands they sell, as opposed to running one brand. We have a couple of external sponsors that we’re finalising, and we also have the TV series, which has attracted a lot of attention.

How was that experience of witnessing all the riders show up and complete the selection process?

I have to say, the level of commitment shown by the riders from the moment we started and how they bought into what we were doing really blew me away. The interaction between riders, which is never seen at a track, really took off – I’m just so surprised with how good all the guys were and how committed they were to the process. It made selecting two riders really, really difficult. It was really rewarding to bring in a whole range of experts to give them information – it just seemed liked a really worthwhile exercise, even if you didn’t make our team, everyone walked away with new contacts who are experts in their chosen fields. We just opened up their eyes, and the level of commitment was unbelievable. I can’t thank all the participants enough – it’s something I’d like to run every year. It was a really, really rewarding experience for everyone. 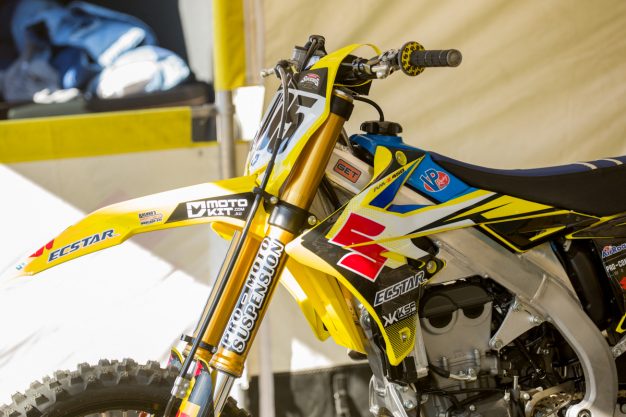 You mentioned the TV series earlier, how was it received amongst everyone having the cameras rolling at all times?

I don’t think any of us knew what we were getting into – it was a fully outsourced production team with a director and everything. We had to be a little patient at times with the set-up of it all, and everyone was nervous at first, but as time went, everyone seemed to be quite comfortable and it was as if the cameras weren’t even there. Everyone was happy to participate in interviews immediately before or after they were doing something. It’s a different experience – I’ve never experienced it and neither have the riders – but it was full on – the cameras were right there in your face every single day. It was big.

I saw that the first season will roll out soon, but filming is supposed to commence for season two as well. Is that correct?

Yeah, what we’re aiming to do is that have three series’. The first has been shot and completed, with the final promos heading to networks this week. We hope it gets picked up here, but we’re also trying to negotiate deals globally. That leads us into filming season two in about two weeks’ time – it’s all about following the journey of riders with motocross as the backdrop – it’s the journey and history of the people involved. I wouldn’t call it a documentary, and I wouldn’t call it reality TV – it’s somewhere in the middle. It’s real, nothing is scripted and we plan to film everything that happens over the 10 rounds of nationals.

And with the two riders, what level of support will they be receiving?

Both riders are fully supported by us, and Rodbell will receive a wage on top of that, but the support for Prutti and Rodbell is exactly the same – it’s all the gear, all the bikes, all the engine work, transport, accomodation, entries – it costs them zero to go racing, and on top of that, they have the Suzuki contingency program. We’re also backing Jayden Rykers, who has a deal with dealership Byrners Suzuki, and we’ll support him in MX1. He has support from Suzuki and the dealer, and we’ll assist with everything else to keep him in the sport.

A month out from the MX Nationals opener, what’s the expectation going in?

Starting with Jayden, he’s making his MX1 debut, so I don’t want to put any pressure on him. I know he has really high expectations, but I think a top 10 finish is well within his grasp. I think a really positive year for him would be to finish around seventh or eighth in his first year – that would be a successful year. John Prutti, I think he can crack into the top 10 – he’s never really had an opportunity like this – he’s really dedicated and has been training the house down since December. Justin Rodbell from America – he’s an unknown to be honest – he’s really fast, and he turned down a small supercross deal to fly out here on his own money to participate in our trial. During the trials we had Lyndon Heffernan with us, and his words were that the kid is fast – he has the potential to be a podium rider later in the season. I don’t know – he’s young, but for me, I’d just like him to settle in and see how he goes.