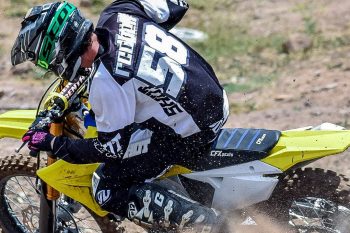 KSF Suzuki Racing has confirmed its line-up for the 2019 Pirelli MX Nationals after hosting a selection event and trials process at the beginning of the year, indicating it will support three riders in different capacities.

Victor of the competition, which is set to be aired as a mini-series titled Thirty 5 Drop, American Justin Rodbell, will receive a paid ride in the premier class alongside complete support for John Prutti, while the team has also extended its assistance to Western Australian Jayden Rykers, who’ll graduate to the MX1 class with backing from Suzuki and local dealership Byrners.

Utilising an elimination model documented in a reality TV style production, a two-day selection event saw participating riders analysed by a number of specialists and professionals before being shortlisted to a dozen applicants, with the final evaluation taking place in the following weeks, consisting of rigorous physical, mental and skills testing.

“Throughout the trials, we looked at our criteria which included speed, endurance, fitness, mental approach, interaction and social interaction within the team,” explained KSF Suzuki Racing’s Scott Fischer. “We selected the riders, Justin Rodbell and John Prutti. We were looking for something different than to just pick up anybody who was on the market, and we did approach a few riders, but they decided they didn’t want to ride outdoors.

“We’ll field a MX1 team only this year, and we’re proud run Suzuki again this year as KSF Suzuki Racing, but we’ve also teamed up with MXstore, and we have a bit of a different concept with them that no one else has done – we’ll represent MXstore and the brands they sell, as opposed to running one brand.

“Both riders are fully supported by us, and Rodbell will receive a wage on top of that, but the support for Prutti and Rodbell is exactly the same – it’s all the gear, all the bikes, all the engine work, transport, accomodation, entries – it costs them zero to go racing, and on top of that, they have the Suzuki contingency program.

“We’re also backing Jayden Rykers, who has a deal with dealership Byrners Suzuki, and we’ll support him in MX1. He has support from Suzuki and the dealer, and we’ll assist with everything else to keep him in the sport.”

A platform for Thirty 5 Drop series is currently being shopped around, with hopes of being broadcasted both domestically and internationally. Round one of the Pirelli MX Nationals is scheduled for 17 March at Appin in New South Wales.