Webster and Budd to make up official two-rider squad. 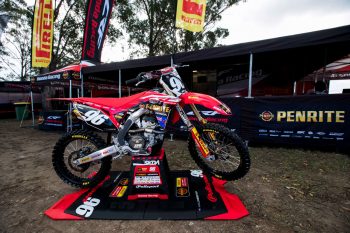 Webster, who revealed his plans with the squad to MotoOnline.com.au last November, is set to embark on a pre-season campaign in the New Zealand MX Nationals in hopes of strengthening his assault in the Pirelli MX Nationals.

“I’ll be racing selected major New Zealand events over the next couple of weeks, which will really help me to prepare and be as ready as possible for the start to the Australian season,” Webster commented.

“2019 is set to be a big year – it will be my fourth season with the Penrite Pirelli CRF Honda Racing team, and having Craig [Bolton] on board as my team mechanic will give me added support to chase race wins and championship victories. I want to be as consistent as possible and be there at every race, every weekend, chasing wins all season long.”

Budd, a member of the outfit for his rookie MXD season in 2018, will remain in the development category, firmly setting his sights on being a podium regular this year.

“It’s early days yet, but from the very outset the connection with the Penrite Pirelli CRF Honda Racing team has been really positive and I’m looking forward to the season starting with the MX Nationals at Appin in March,” Budd explained.

“2019 will be my final year racing in the MXD class, so I want it to be a special one. My goal is always to win and be in the front pack and consistently make the podium, so that’s what I’m aiming for this year.”

Outgoing rider Jackson Richardson revealed last month that he would provisionally step away from racing after being unable to lock down a seat for this year. The opening round of the MX Nationals is scheduled for 17 March at Appin in New South Wales.