Webster to remain put at Penrite CRF Honda Racing in 2019

Western Australian continuing on in 250cc category next year. 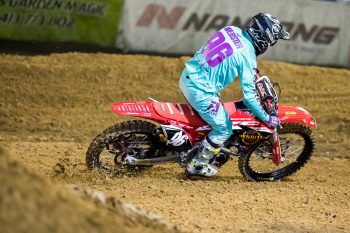 Kyle Webster says the plan for 2019 is to remain at Penrite CRF Honda Racing in what he believes will be his final term in the 250cc category.

Next season will mark the Western Australian’s fourth campaign with the outfit in a partnership that has experienced the best and worst of motorcycle racing, suffering a serious back injury in 2017 before earning his maiden Pirelli MX Nationals MX2 overall victory at Wonthaggi this year.

“I’m going to stay with Honda again,” Webster declared to MotoOnline.com.au. “I’ve been with them for a few years now and everything is just getting better and better each year. The team has some good things in the works for next year, and I just love the people around me – I feel it’s right the thing to do.

“I’m going to stay in the 250cc class – ideally I’d like it to be my last year in the class before stepping up to the 450cc category in 2020. We’ll just have to see how things go really, there’s no real urgency to step up. I’ll keep having a crack at the 250cc title while I can. But, I’d definitely like to go to the 450cc class the following year.”

Webster earned a number of podiums, including two round wins, in the MX Nationals this year, however a host of DNFs ultimately hindered his championship ranking that saw him finish in seventh position. The number 96 currently sits 11th in the Australian Supercross Championship SX2 standings with one round to go at the Monster Energy AUS-X Open Sydney next week.