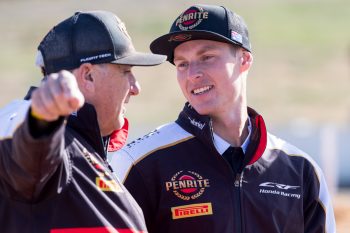 Days after making his SX1 debut in a one-off appearance at the Monster Energy S-X Open Auckland, popular Queenslander Jackson Richardson has declared he intends to graduate to the premier class full-time in 2019 should an opportunity come available.

The two-time Australian Supercross SX2 champion, who spent an injury-riddled 2018 season with Penrite CRF Honda Racing, is one of numerous riders out of contract for next year with just a limited number of vacancies across teams.

“I intend on going to a 450 in 2019, but unfortunately there aren’t any rides available – they’re pretty much all taken,” Richardson explained to MotoOnline.com.au. “It’s the same in the 250 class, so at the moment I don’t have a ride at all.

Richardson’s maiden 450 supercross outing saw him wind up seventh overall in New Zealand, finishing behind a host of domestic and international talents that made the journey to Mount Smart Stadium.

“It was good [on the 450] and overall it was pretty good weekend,” he added. “I would’ve liked my result to be a bit better, but it was good to get out there with dudes like Reedy and all that – it was mint. It was an amazing atmosphere there, the place was sold out – it was ridiculous.”

The number 57 returned to Australia in 2016 after racing in America, taking out the SX2 title with Serco Yamaha before embarking on a full-time campaign with the team in 2017. An injury cut his outdoor title hopes short, although he bounced back for supercross and lifted the SX2 crown for the second consecutive year.

A transition to Honda in 2018 was once again marred by a shoulder injury, which ultimately saw him return to riding just weeks ahead of the Australian Supercross Championship opener. Teenager Rhys Budd has been linked to the second CRF Honda Racing seat for next year alongside a returning Kyle Webster.