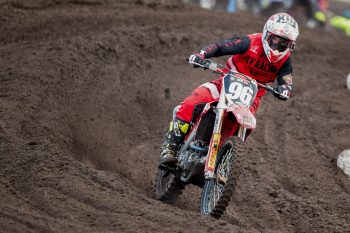 Penrite CRF Honda Racing’s Kyle Webster has expressed his satisfaction in breaking through for a maiden victory at Saturday’s third round of the Pirelli MX Nationals in Wonthaggi, Victoria.

Webster dominated proceedings in the opening affair to claim a 14-plus second victory, while in race two he maintained second for much of the outing, only to crash in the final stages and collect third, which granted him the number one spot by singular point.

It’s a remarkable result for the South African-native, who just seven months ago was sidelined with a serious back injury sustained at Bacchus Marsh’s round of supercross, which resulted in two plates and 10 screws being surgically installed in an effort to stabilise the injury.

“It’s so satisfying to finally win a round of the MX Nationals,” said Webster, who’s fallen just shy of the top step of the podium on a number of occasions while campaigning in the domestic championship.

“I’ve been working so hard towards this result, it’s amazing. I’m so grateful for the huge effort that my team puts in to make this possible and to have had both Honda and Penrite present at the event made it really special.”

Unfortunately Sunday’s fourth round wouldn’t play into his favour as he became one of the many victims of mechanical failure in the opening moto, denying him the opportunity to back up his stellar results from Saturday.

Webster sits seventh in the championship standings following the damaging DNF as he returns to action this weekend in Murray Bridge, South Australia, marking the fifth stop of the MX Nationals.