We’re coming to you direct from Qudos Bank Arena where Foremost Media has assembled our largest presence of the year for what is no doubt the most important event on the racing calendar, the AUS-X Open.

Last year’s inaugural event was incredible, as we’ve said so many times before, and this year is set to be an even more polished event from AME Management. It truly is the ultimate way to round out the domestic season.

We’ll be on deck all weekend – probably a good 28 hours worth of coverage from the arena – and plan to deliver what will be the most extensive range of content we ever have on MotoOnline.com.au. And that’s largely because the promoters hugely assist us in doing so.

Not only do we have the excitement of the added internationals in Sydney for AUS-X Open, but both days this year will be Australian Supercross Championship events. And good news for the fans is, the SX1 and SX2 titles are going down to the wire.

Ticket sales are up over last year, which is immensely positive for the sport locally, but not only that, those who aren’t able to make it to Sydney will be able to watch both nights completely live on Fox Sports (there’s even international broadcasts as well). Check those details out here.

Otherwise, if you aren’t able to view on TV either, we will have ongoing coverage in Racefeed on MotoOnline.com.au from throughout practice, qualifying and into the night shows. So it’s definitely a positive vibe, this event’s set an extremely high benchmark in AUS Supercross and we can’t wait for the action. Here’s Spence… 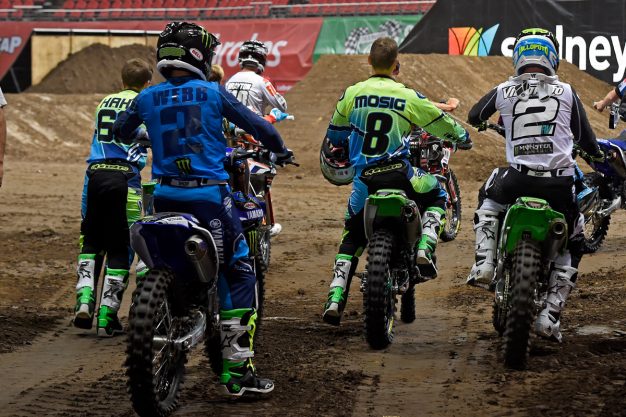 The time has come! It’s AUS-X Open weekend and I’ve personally been amongst the action already with press day duties for MotoOnline.com.au. It was awesome to see riders such as Ryan Villopoto, Chad Reed and Cooper Webb mixing it up with both domestic stars of the sport and our regular American contenders for 2016.

The track, well let’s just say that the finish line jump is gnarly and the rest looks fairly similar to last year’s layout, which I personally think created great racing. Overall we’re in for another awesome event, the guys at AME Management really know how to put on a show, and both Saturday and Sunday’s events are sure to be impressive.

My main priority at press day was to create a Pre-Race film, which you can click here to view. We had minimal time to shoot inside the arena, and as always, it was hectic with riders and media everywhere. Luckily the riders threw down as many laps as possible and I was able to get my shots and move on to the interviews.

It was great to check in with riders such as Chad Reed, Cooper Webb and Ryan Villopoto to hear their thoughts on the 2016 event. Having Reed and Webb returning for 2016, and Villopoto making his AUS-X Open debut, there were a mixture of comments made. Both Reed and Webb feel much more confident with their programs for 2016, and RV, well he’s just here having fun!

The guy is still amazing on a motorcycle, as expected, and although he has talked down any chances of an upset win, you’d be crazy to bet against him. He may not have the fitness following retirement, but he sure has the skills and racecraft to make magic out on the track. I personally can’t wait for the racing to get underway, and if you haven’t got a ticket yet, go buy one now! Well that’s all from me this week, here’s Jeremy… 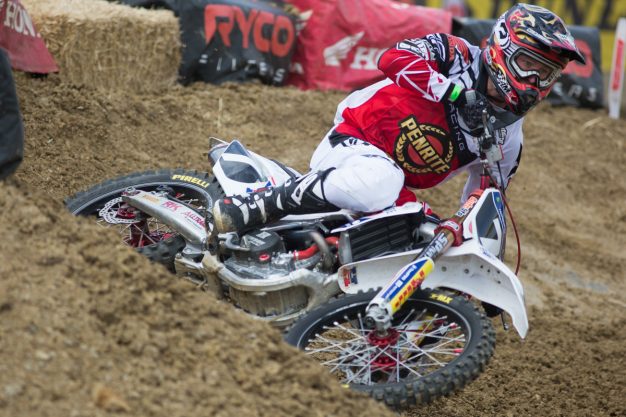 What is probably the most highly anticipated weekend in Australian motocross and supercross, is finally here! I honestly can’t wait to see the likes of Reed, Webb and Villopoto hit the track inside Sydney’s Qudos Bank Arena for this years AUS-X Open.

While those three guys are stealing the spotlight, this weekend’s event will also see our Australian supercross champions crowned, as the AUS-X Open will be held in conjunction with rounds five and six of the Australian Supercross championship. I think the addition of the three extra riders could play a pivotal role in how the SX1 championship pans out.

With that in mind, the circuit also won’t be your regular type of supercross track, as the arena’s small floorspace will provide significantly tight racing – these are two huge factors for our championship regulars. Aggressive passes will be a common sight both tonight and tomorrow, and with a championship on the line, and I’m sure plenty of pride, there’s going to be more incentive for riders lay it on the line.

The SX2 category doesn’t exactly have the same issue with three additional big-name riders, although we will see two new faces in the series this weekend – Blake Lilly and Justin Hoeft. Both of them are very capable riders, although it’s unsure of what they can do inside an unfamiliar arena.

Only eight points separate championship leader Hayden Mellross and Jackson Richardson, which is a relatively small margin with 30 points up for grabs over the weekend. Mellross is the favourite for the title – he has been extremely consistent all season long and is yet to finish off the podium.

American Gavin Faith has a slim chance of claiming the title being 17 points behind Mellross, although he would be a strong bet to capture victory in Sydney. Not only is he coming off a win from last weekend’s fourth round in Melbourne, but as the 2016 AMSOIL Arenacross champion, this weekend’s tight track layout will play into his favour.