Australian Dean Ferris is back in Europe training for the 2015 MXGP World Championship season, in which he will contest with the factory Wilvo Nestaan Husqvarna Factory Racing team. MXLarge spoke to Ferris about his prospects at the point in the pre-season. 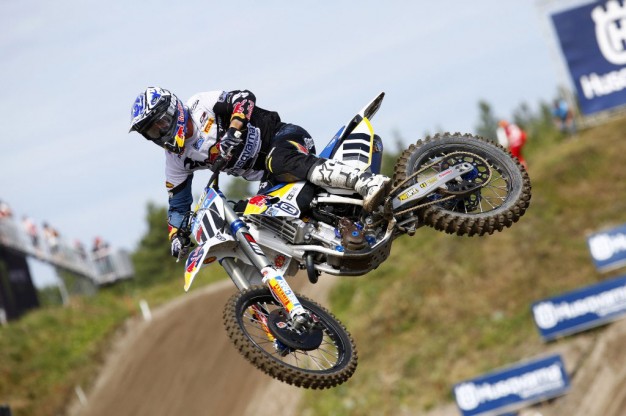 Dean, what have you been up to since your accident in Brazil?

I was stuck in Brazil for a week, because it was a pretty serious injury. I pretty much got into rehab. The first six weeks is really important for the leg and I was busy doing that. Now it’s stable and strong and I did light training in the pool and stuff like that.

You had a rough season with injury. Does it ever enter your head that this game is just too dangerous?

You know as long as I still have the passion, I haven’t thought about giving it away. I had a bad crash at the start of 2013 and I was like, man this hurts a lot, why am I doing it. That didn’t cross my mind when I broke my leg in Brazil, I was laying on the track thinking when can I get back on the bike, counting down the months. For people who keep having injury after injury I understand, but I am still young and am keen to keep doing it, despite the injuries.

You had a pretty mixed 2014, but you did show some good results when you returned to the GP scene. Are you happy with those five GPs you ran?

I would say I was, I had some good races, and Finland I was just a few corners from getting on the podium, and did well in Lommel. Also did a German international and anyone who has done one knows those guys are really on it. I had to race Max Nagl and straight up beat him in moto two and he went on to win some motos in MXGP. My form was coming on good and my fitness was back to where it was and I was giving it my all to get my first MXGP podium in Brazil, but that all went to crap. I was satisfied though.

I am not a sportsman, but I imagine that you need all the boxes ticked to come into a season feeling confident. How are you coming into 2015?

This year was tough. I had some injuries in between going to America. I really enjoyed racing for IceOne with Antti once I returned to the GP scene. We had a good structure and we were focused and now with the new team we are very focused on what we want to do. It’s now the focus to get fit and be 100% ready. When you are strong after injury you don’t need to think about anything but getting ready.

What is the plan from now until Qatar at the end of February?

This is the first time I will spent my winter in Europe and I start riding again in two weeks. I love being on the bike and even just play riding with my mates. I already started physical training and we have a really solid plan up until Qatar and then further. The team has a trainer and I am with him every day. If the weather turns bad in Belgium then we will head to Italy or Spain for some better tracks.

Where is the best place to prepare for the season. Which circuits?

Everyone goes to Lommel and it is because it is always open. It is nice to mix it up a little, go do some hard pack in Italy, but for me I hope it’s a mild winter and I can spend some time at home in Belgium. It’s good to prepare in Belgium the tracks are rough and it is better to be home, you sleep better, eat better.

You signed you new deal and it’s with a semi-factory team right?

I have to correct you, it is a full factory team. Everything comes from the factory and we have the same bikes as Ice One and all the information is shared, so if I want to same bike as IceOne I get it. We will spend all winters and come up with some different setting as everyone does in the winter. It’s as good as it gets. I asked you this before, when you returned to the GP scene. Todd (Waters) and yourself have a rivalry from when you both raced in Australia. But two Aussies both riding for Husky, will you help each other in any way?

We are not training buddies or anything, but obviously we will try and beat each other, which always brings us to a higher level. He has his program and I have mine and it will be like it always was. We race hard and want to beat each other, so we keep pushing.

There is now a lot of talk of an Australian Grand Prix. Pretty cool if it happens, but what circuit would you like it to be at?

There has been some controversy on Facebook and stuff, but I think we should go to Conondale in Queensland, because it would be nice to have a really nice natural grass track, and it still has some jumps, but the beauty is it’s really beautiful scenery around there and it would be good to have the European riders and paddock guys and show them the real Australia. Some people think we should go to a sand track, but the event needs to be big and I think it’s lame if we go to a sand track, we already have a bunch of those in Europe. I would say Conondale or Echo Valley in Toowoomba, both are great circuits.

I had spoken to Kevin Williams and he mentioned both those circuits might be a bit tight for room?

I think there is room at Echo Valley and that is the tightest one. Being that everyone ships their bikes and it won’t be a real GP paddock, it should be okay. I think with Echo Valley it is in the city [of Toowoomba] and would get a good crowd. With Conondale it is a little out of the way, but if they promote it properly, then they will get a crowd.

Ryan Villopoto versus Antonio Cairoli. You got an opinion on that?

You know, I actually have no idea, and I just want to see how it unfolds. Some people are saying he might not be that good in the sand or whatever, but the guy can ride a bike really well, the tracks are different to America, he might adapt or he might not, I don’t know. For sure, I think it’s great and it would be cool to look back on the year Villopoto came here and we got to race him, it’s pretty cool.

Last question, any races before Qatar?

For now we will only do Valence and that is it.