KTM Enduro Racing Team’s Toby Price was back on top at rounds five and six of the Yamaha Australian Off-Road Championship at Hedley last weekend when he stormed to two wins and the championship lead.

MotoOnline.com.au sat down with Price following Sunday’s race to get his view on the weekend that was and his perspective on this year’s championship. 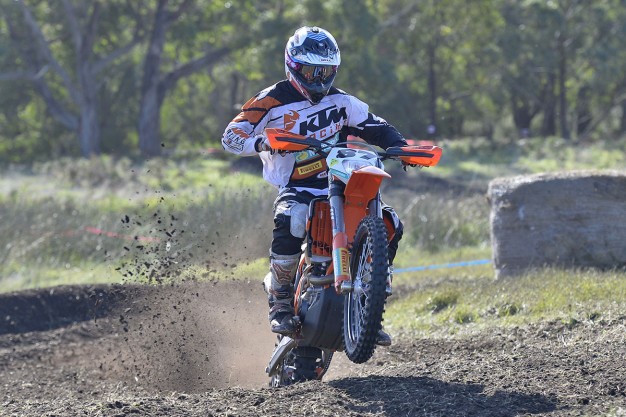 What a weekend it has been for you. Two round wins and you walk away from Hedley with the championship lead. How was your weekend from your point of view?

All in all, the weekend went really well. I can’t complain about two firsts that’s for sure. We just have to try and stay smooth and consistent for the rest of the year now and just try and keep that good flow going. It definitely is unfortunate not having Daniel [Milner] out here this weekend, but unfortunate accidents happen so I hope he will be good to go for the next round in South Australia. For us but, it was really good. The KTM 450 EXC was working awesome, we had no problems all weekend, so yeah, we can’t complain one bit! A big thanks to the whole team who worked so hard this weekend as well! I’m looking forward to doing some desert racing stuff now. Then in seven weeks from now we will be back racing the AORC. We just have to stay fit and healthy and will be good to go!

So from here on, you go to Finke?

Yeah, we leave this Tuesday to go out to Alice Springs to do a bit of testing and bit of pre-running for a week. Then we will be home for a couple of weeks, then we will be back out there a week and a half earlier for the actual event. It’s coming around real quick. It’s only 34 more days to go. It’s coming up on us fast and we’re really looking forward to it. Hopefully we can get a good setting and keep the body in good shape, good health and will see what we can do.

Looking towards the next two rounds now at Coonawarra in June, the series will have two Sprint format rounds. Have you ever raced at Coonawarra at all?

I’m not 100 percent sure; I don’t think I have. The organisers have said it will be sandy conditions again like this round. So we’ll go and find some sand tracks and get into those a little bit. The bike was good, but it was not handling too well here. We’ll get on top of that in a little bit in the next few weeks and we’ll look forward to the next round in seven weeks. We will see what we can do, will see if we can keep the Motorex KTM and Pirellis up the front and stay smooth and consistent. This round was in sandy conditions. The next two rounds in South Australia will be almost the same condition. Do you like the sand?

Yes I do! I love riding in the sand, it’s awesome. Today was a little bit different but. It was sandy in some spots, then other places it was like real fine bulldust. It kind of felt like you were some times aquaplaning on water. It was really hard to keep good momentum going through some of that stuff out there. So I just tried to stay on the bike, on two wheels and punch out some good laps. I won the three-hour Cross Country yesterday and the track was a bit beat up and my body was feeling a little bit beat up as well because it has been a while since I have done a three hour. Other than that it’s all good at this stage.

Six rounds down now, six to go. If you do win this championship this year, will you look back on this round as the pivotal moment?

Yeah, pretty much. Definitely. The last couple of rounds we have all had bad runs. Everyone has been up and down. We have been pretty inconsistent at the moment. We’re definitely pushing the limits these days. We’re trying as hard as we can. It’s not like there are one or two guys that are fast, there are about five, six or seven guys that are fast. So it’s making it pretty hard and we’re doing the best we can. It’s good to see, we just have to try and keep the momentum going. For us it has made a pretty big change. Yesterday, Glenn [Kearney] and myself were locked on points in the Outright championship with Josh [Green] in third. Now I’m leading the championship with Josh in second and Glenn back in third. These two rounds have definitely been a change for us and a change for the good. But as I said it’s unfortunate that people get hurt. I can’t say enough for Daniel, I bet he is a bit torn apart sitting on the side of the track watching. I know what that feeling is like and it definitely does suck. But he will be back and he will be back bigger and stronger again. But we definitely won’t have it easy this year by any means. This championship will more than likely go down to the wire at Heathcote in September.

Well, thanks for your time Toby. All the best of luck at Finke in June and we’ll see you at Coonawarra on the second last weekend of June.