Dean Ferris made his Monster Energy Supercross debut at the opening round of the 2014 championship last weekend, held in Anaheim, California. The 23-year-old Australian finished a fighting 14th, making it through to the main event after a solid eigth place performance in his heat race.

Ferris was carrying a virus on the weekend and is still struggling with being able to practice because of the virus, however we caught up with him and asked him about that daunting experience that was his AMA Supercross debut. Dean, 14th place was probably off what you had hoped for, but its wasn’t that bad considering the situation?

You didn’t have as much preparation compared to the other guys and with not a lot of supercross skills, you sort of came in a little lacking preparation, or not?

50,000 people, riding for the Red Bull KTM factory team and making your AMA Supercross debut. How were the nerves? Did you struggle at all with the whole experience?

No, actually, not at all. I was zoned out and I didn’t even notice all the people there until I looked back at the pictures. There was no pressure from the team, and I just wanted to do my own thing and learn.

I would have expected better results and I will in the future. I have been sick and still am and I could hardly concentrate and that hindered my results a lot.

The intensity of the AMA Supercross races, was that tough to get used to?

You know what, I struggled in the race with the intensity and I thought it was because of the race, but I went training yesterday and I struggled at the test track. Because I have been sick I am all stuffed up and I am on medication and yesterday I could only do five laps and I was struggling to breath and everything.

I didn’t get a real good feel and I won’t until I am 100 percent fit. I mean I felt pretty sick. It will be more intense than practice, but it was a struggle being crook.

How did the team feel about your performance?

The team said from the beginning to just learn and get through the supercross. They were awesome they gave me space and I didn’t do anything stupid and they were happy about that. I rode well withing my limits, but its still I should probably hang it out more in practice and have a go at the corners and stuff, but it will get better. 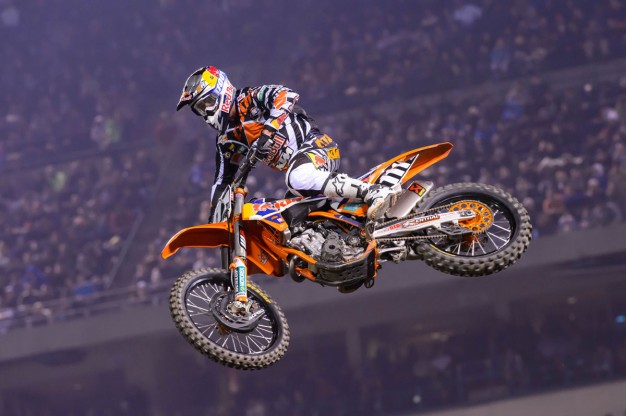 What about the whole experience of racing at Anaheim 1?

I loved it. I thought the day would be a drag because we get there at 10:00am and leave at 11:00pm, so it’s a long day. But my day went really nicely and I had an awesome time. I was busy the whole day and with practice and signing sections and then heats, the final, watching the 450 main. It was really a lot of fun.

Chad, Matt Moss and yourself all being Aussies, did you catch up at all?

I said g’day to Chad on the Friday, but we were both busy and we were there to go racing and not have a barbie. I ran into a bunch of Aussie fans and I had friends I knew were going. Out of the 50,000 people you would hope I had some supporters.

And you watched the 450 main event?

Yep, I watched the 450 main and I wasn’t going to miss that. It was big for KTM, the team was awesome, but I was also rooting for Chad because he is an Aussie. Stewart crashed and a lot happened, so it was a good show.

What about this weekend in Phoenix, will you be fit?

I need to get a second opinion, because I am still sick and like I said I tried to practice yesterday, but had to shut it down early. Without too much practice as long as I am healthy I should be better for Phoenix I think.