MotoOnline.com.au checks in with the newly-crowned King of the Cross.

Motorex KTM racer Kirk Gibbs broke through for his first 450cc race victories and overall at the King of the Cross race at Southern Cross, WA over the weekend.

The South Australian has been a revelation so far this year as he continues to gain confidence and race pace within the premier class.

MotoOnline caught up with Gibbsy as he wound down from his win to get his thoughts on what went down. 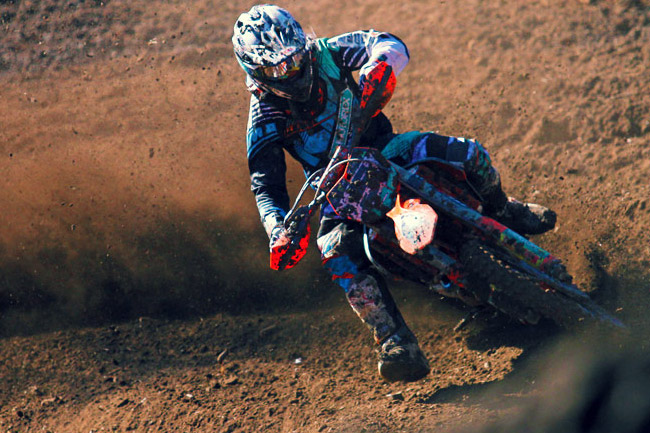 Kirk Gibbs’ win came on his debut outing at the King of the Cross. Image: Simon Makker/Makkreative.com.

Congratulations on your win over the weekend, Gibbsy. How does it feel to get your first MX1 win?

It feels really good. Obviously it’s not a win in the Australian championship – I really want to score a win there – but I’m still happy. I had a good weekend out there and the track was tough. The organisers hadn’t ripped it very deep and it got really hardpack. It was windy and dry, which meant it got quite dusty towards the end of the day and if you were caught any further back than third off the start, you were in for a tough battle as you don’t see much at all. I was lucky I got decent starts all weekend.

Take us through the day – how would you rate your own performance?

The format was five races, with the first three being five-lap sprints, then the last two motos being six-lap back-to-back races. In the first moto I came together with my teammate Todd Waters in the first turn and I went down, but managed to fight my way back to eighth. After that I focused on getting good starts and charging all race and picked up wins in the remaining four races.

It’s weird: I don’t know if it’s my style of riding, but I seem to ride better on hardpack tracks where there’s not much to turn off. I don’t necessarily enjoy it, and I don’t feel at my best, but it seems to work well for me.

I just need to keep that momentum alive and work on a few things before this weekend’s round of the MX Nationals at Swan Hill.

Was that your first time at King of the Cross?

Yeah it was. It’s a pretty good event and they put up a lot of money. It’s out in the middle of nowhere and they have a good thing going for sure.

It was just a bit of a bummer that they hadn’t had much rain and the track was in the worst condition the boys had seen in a long time. Jay Marmont has been there the last four years running and loves going over for it. He rode well, as did Jake Moss and Cody Mackie who finished second and third. It was a bit of a shame that Todd pulled out after falling on his shoulder, but he’s got more important things like the MX Nationals championship to worry about. Yeah, that’s fair enough. We’re heading into the pointy end of the MX Nationals now. How much of a confidence booster has this win been for you?

It’s interesting as we’ve gone from a hard, rutty track at Appin, to Hervey Bay, which is a proper sand track, to Southern Cross, which was hardpack, and then back to Swan Hill, which will be hopefully be loamy and develop lots of ruts.

We’ve seen all sorts of conditions in the past few weeks, but my confidence is good right now.

I don’t rate the King of the Cross win on the same level as the MX Nationals, but it has given me confidence to know I can beat those guys. I’m not putting pressure on myself to get on the podium every week, but if I’m top five I’m happy.

My main goal after a podium is to win a race and maybe a round overall. That’s my high expectation and if I can do that I’ll be over the moon. But the field runs so deep that I just want to stay healthy and consistent all season and focus on those top fives.

No doubt the Motorex KTM team is really happy with your progress and results in 2013. I think you’ve exceeded everyone’s expectations in your debut year on a 450.

Yeah, the team is great. I wouldn’t matter if I was running around 10th position – they have my back and it’s a great environment to be a part of. What they give and the support I receive, it makes it hard not to do well. They’ve given me everything I need to ride a dirt bike and it’s starting to pay off.

The Supercross season is just around the corner too. Have you started training for that?

It’s definitely going to be tight between the Nationals final at Coolum and the first two rounds of the supercross in Darwin, but after missing the series last year due to injury I’m really looking forward to it. I think my new teammate Dan McCoy might have an edge on people as he’s already riding Supercross, and we’ll start our testing next week on the 2014 models. Darwin will be interesting to see who has adapted from motocross to Supercross the quickest.

Perfect, thanks for the chat, buddy. All the best for Swan Hill this weekend.