It’s been a frantic few days since heading up to Hervey Bay for the MX Nationals, highlighted by the 2014 Yamaha YZ450F launch hosted by Yamaha Motor Australia in Brisbane on Monday and Tuesday.

Coming off five straight championships with the YZ450F in MX1 thanks to former CDR Yamaha regulars Jay Marmont and Josh Coppins, it’s an important model for the brand and the end result is a very impressive motorbike.

MotoOnline.com.au had former national champion and Alteregoelite trainer Dan Reardon on hand testing for us and we’ll have the full review online before the week’s out.

Also on track during the launch were 2013 CDR Yamaha riders Billy Mackenzie and Lawson Bopping, as well as off-road ace Daniel Milner. The trio all had their first tastes of the 2014 YZ450F alongside the Australian MX media.

Today though CDR will hold an even more important test from their perspective with Mackenzie and Bopping to be joined by team test rider Coppins. If today’s a success and the right support is in place, the team could race the bike in the final three outdoors.

What’s interesting there is that following his win at Hervey Bay, Mackenzie is within striking distance of series front-runners Matt Moss and Todd Waters. Could this be the factor that elevates him to another level during these final three weekends of racing? MX1 class victor Billy Mackenzie backed up the day after his win to take part in Yamaha’s launch of the 2014 YZ450F. Image: Simon Makker/Makkreative.com.

It’s been an exciting week and another intriguing one from a domestic standpoint, as Simon Makker will outline in his section a little further down.

A major surprise popped up on Instagram last Saturday when current Australian Supercross number two Daniel McCoy posted an image of him decked out in Motorex KTM gear aboard a factory 450 SX-F – as we hinted last week.

Funnily enough, when I questioned team manager Rob Twyerould about the image he said that it was great to see the team’s marketing pay off with McCoy purchasing the same bike and gear that the official team uses.

Of course, he was just joking and it is obviously the team’s equipment, but from what we understand a contract has not yet been signed and it will be made official when the paperwork is in place. Pretty cool deal and an interesting one at that!

What it indicates is that Todd Waters will be part of Team Australia at the Motocross of Nations, but that’s not confirmed yet. However, Twyerould did say that Waters will be attending the event regardless, as well as the final GP even if he’s just spectating.

It’s believed that Chad Reed is keen to represent Australia once again in the iconic event, plus Brett Metcalfe is a favourite for the other 450 seat. The smart money says it’s between those two and Waters for an MX1 or Open position. As for MX2, it’s hard to look past Dean Ferris.

That’s it from me here for now, here’s Makker… 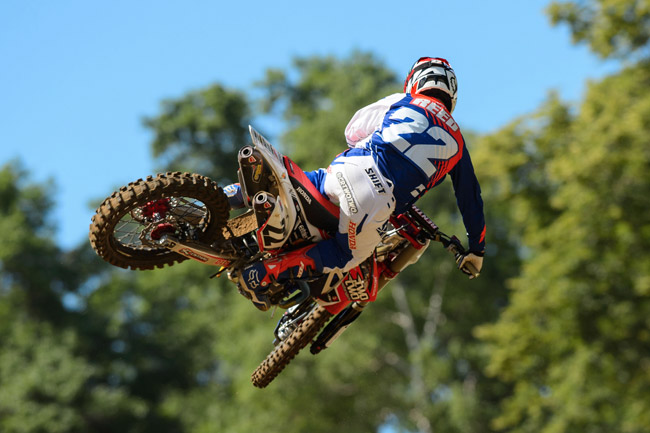 Chad Reed is an easy tip for a MXoN berth. Image: Simon Cudby.

With round seven of the MX Nationals championship in the books, we’re starting to head towards the crunchy part of the season, but 2013 continues to throw all sorts of whacky curve balls and developments at us.

Who would’ve predicted that Billy Mackenzie’s 3-3 result would beat Jake Moss’s 2-2 result for the round win at Hervey Bay, thanks to those magical points on offer in Super Pole?

Who would’ve guessed that Todd Waters would finish outside the podium positions for the fourth round in a row?

Who would’ve gambled that Yamaha would finish on the top step of all four podiums (including Rookies) while the powers-that-be from Yamaha Japan were in town for the 2014 YZ450F launch the next day?

Who saw Gareth Swanepoel bouncing back a suspected fractured wrist (which was since confirmed not to be fractured) during a horror first round at Appin to win the first MX1 moto of the day two weeks later?

It certainly has been anything but a dull championship race, and with Matt Moss pinching the MX1 lead by two points from Todd Waters at Hervey Bay (after several laps of desperately banging into each other and trying to punt each other midway through the first moto), things are going to heat up even further before this season’s done. Cheyne Boyd’s back on a Yamaha and will only get stronger as the series begins its run home. Image: Simon Makker/Makkreative.com.

I’ve gotta say it was great to see Cheyne Boyd back out on the track filling the void in Craig Anderson’s Berry Sweet Yamaha team created by Tye Simmonds’ sudden departure.

Not surprisingly, Boydy had done very little testing with the team in the lead-up to ‘the Bay’, and they almost used the event as a hit-out to get the YZ450F set up. It’ll be interesting to see how much improvement he makes by Swan Hill next weekend.

Speaking of Swan Hill, the question on people’s lips is who will Honda enlist in MX2 for the remaining three rounds? More importantly, with all this ‘Honda curse’ buzz, who would be game enough to tempt fate and stick their hand up?

Honda rider Peter Boyle’s name (remember he podiumed at Hattah this year, so he’s fast and fit) has been bandied about, as has Errol Willis. There has been no official word from the team as to who they might sign up yet, but really, there aren’t too many more options out there.

Another rumour I’ve heard circulating since Hervey Bay has linked Serco Yamaha and South Australia’s Luke Arbon for a Supercross deal. Hey, it fits well with Serco’s ‘Keeping Up With the Lukes’ theme. With Luke Clout out for six months and the team needed a rider alongside MX2 dominator Luke Styke!

Finally, a big congratulations to 2011 MX2 champion Ford Dale, who told me at Hervey Bay he’s gonna be a dad in December. Congrats mate – I certainly hope the kid has none of your looks! That’s about all I know this week.