The season-opening Dubbo round of the Terex Australian Supercross Championships has been labeled a success by all accounts, especially considering International Entertainment Group’s late addition as the 2012 promoters of the series.

IEG was named the new promoter officially at the beginning of May after Global Action Sports hung up its Super X helmet, leaving five short months for the Melbourne-based company to prepare and set up the infrastucture that running a supercross series takes.

In speaking to IEG managing director Yarrive Konsky this week, he’s reasonably satisfied with the evening, but understands there are a few kinks to iron out in the scheduling and general running of the events. We asked a few key industry insiders this week what they thought of round one in ‘The Point’, so click here to check that out.

The series is really beginning to gain momentum after just one round, especially with the confirmation that Chad Reed’s coming to play for the final three rounds. Traditional formats, quality designed tracks and an opportunity to compete in front of his MotoGP friends at Phillip Island next weekend are just a few of the reasons why we’ll be seeing the TwoTwo here in ASX.

Monster Energy was a late signing as a series supporter, just days out from the opener, and they’ve created a unique Triple Challenge within the final three rounds – additional money that will very likely go in Reed’s back pocket if he enters with the form we expect from him. 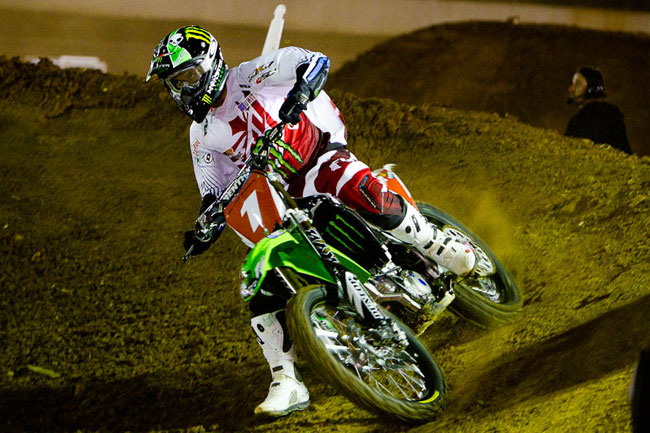 Monster Energy could payout a whopping $20,000 in prize-money across the board for riders who can achieve these feats. More than anything though, it’s nice to see the energy drink giant back supercross and will do wonders for the sport’s branding within this country, as it has done for the MX Nationals.

It was fitting then that Jay Marmont finally lived up to expectations for Monster Energy Kawasaki with the SX-Open round win. After a horrid outdoor campaign, Marmont was in fine form at the opener, stepping onto the podium at a national level for the first time with Kawasaki. Can you say relief? Anyway, here’s a quick interview we did with Jay post-race.

The ride of the night arguably went to Daniel McCoy, the CDR Yamaha guest for supercross leading over half race distance and challenging Marmont all the way home. I tell you what, if supercross keeps its upswing in the coming weeks, McCoy may just keep his ride at CDR full time in 2013 – and he could surprise outdoors too, given the team’s world-class support.

There was a lot to talk about after a big weekend and we’re doing our best to keep up, day in day out in the news, but a big congratulations has to be handed to IEG in these early stages. If you want to see the race for yourself, stay tuned for Speed TV Australia’s telecast next Friday night.

Reed’s inclusion into the series will be spectacular and it will actually be the first time we in Australia see the 2013 model CRF450R first hand. Ben Townley and Ford Dale are on the current model, so we can’t wait to see Chad debut at the Island next week. 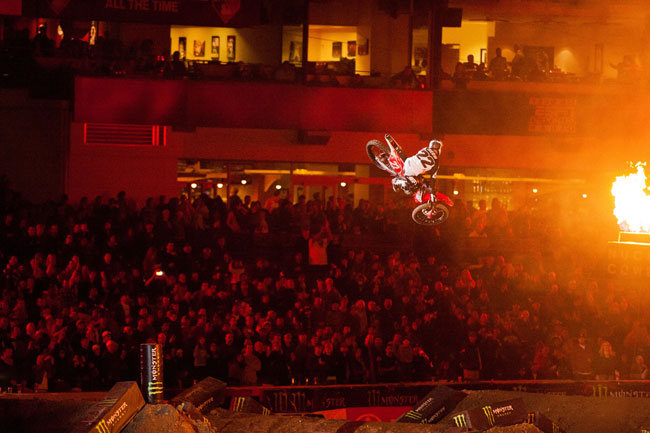 Chad Reed and TwoTwo Motorsports will debut together in Australia at Phillip Island next weekend.

Before then though, Aussie viewers will be able to tune in and watch Reedy race live at the Monster Energy Cup, scheduled to be shown on ESPN this Sunday at 1:00pm. It’s been a long, long time since his Dallas fall, so fingers crossed we can see him in the fight for the cool million dollars.

Bad news surfaced today about Matt Moss’ shoulder injury, which will require surgery and force him out of the 2012 supercross series. Moss was a last minute addition to Motul Pirelli Suzuki for ASX and will stay with them on a 450 in 2013 from what we know, turning his back on a supercross-only deal with JDR/J-Star/KTM in the US mostly due to financial reasons.

Instead, Josh Cachia will take Moss’ place on the team next year in the US and surprisingly opted to head straight to California, instead of riding supercross here. What that means is that the once massive all-star team will field just one rider in Australian Supercross with Ryan Marmont for 2012 and then focus on its American operation next year. We could see them back here for SX though.

MotoOnline.com.au had Grant Reynolds from FiftySix Clix on the ground at Dubbo and he delivered some nice action and pit image galleries from the event, which you can find in the Multimedia section of the website. In the coming weeks you’ll see some very special films from around the country as MotoOnline visits the test tracks of our best, for a heap of behind the scenes action.

A very big news story broke this week with Tye Simmonds officially coming to terms with Craig Anderson to join Berry Sweet/Lucas Oil Yamaha next season. It’s a move that could really boost Ando’s team as he enters retirement, and one that I think will see Simmonds benefit from the experience of an icon like Anderson.

That’s it for this week’s Insider, so thank you for reading and stay tuned for quality supercross coverage all season long. We’re only just kicking into gear for the 2012 campaign.