Dissecting the 2022 season after six rounds of the championship.

The 2022 Penrite ProMX season has delivered its share of excitement and plot developments, with things heating up as the series approaches its conclusion. In this edition of Q&A, MotoOnline answers some of the key questions six rounds into this year’s championship. Q: Who is in the frame for the MX1 title?

A: Arguably it is Aaron Tanti’s title to lose, with the CDR Yamaha Monster Energy rider holding a 29-point lead with just two rounds remaining. However, second-placed Dean Ferris is once again on a wave of momentum after securing his second overall victory of the season at round six. He’s also scored more moto victories than any other rider in MX1 this year. Just five points back is the consistent Todd Waters, but if the FC 450 rider is to keep himself in the frame for the title he is going to need to start winning races. The number 47 is notoriously strong in the sand at Coolum, so we can expect him to finish the season strong at round eight. Tied with Waters is Brett Metcalfe, but with Tanti, Ferris and the Husqvarna Racing Team rider all located within close proximity to the final two rounds in Queensland, it will be a tall order for the popular South Australian to claw back the 34-point deficit he faces to the red plate.

A: Wilson Todd was just two points shy of claiming a third Australian MX2 title at Coffs Harbour and holds a 98-point advantage entering the final four motos of the season. Rhys Budd is the only person who has the slightest chance of stopping Todd from being crowned, but to do that he would have to win each of the remaining races and have a share of fortune on his side. With Nathan Crawford building form on his return and a host of hungry MX2 rivals chomping at the bit, Budd would have to click another gear to achieve this. Todd, post-race at round six confirmed he will likely race a 450 before 2022 ProMX is out and Honda Racing also indicated such in its press release after Coffs Harbour. Therefore, it becomes more of a question of when. While the chances are very slim, the fight is still alive for Budd to secure the MX2 title if Todd were to score less than two points in the final two rounds. Considering this, the hyptohetical options are for Todd race QMP on a 450 and return to a 250 for Coolum – if Budd were to achieve a perfect scorecard at round seven, race both rounds on the CRF450R or try to cross the line to take the title in MX2 before stepping up for the season finals? It is expected this will be clarified in the coming weeks.

Q: When will Kyle Webster return?

A: Honda Racing’s Kyle Webster devastatingly crashed while training just days after taking the MX1 red plate in Mackay. Following a surgery each to repair his left navicular and right ankle, Webster completed his first laps back on a bike around mid-July. When we contacted him shortly after, he indicated he will see how the next few weeks go and make a decision on whether he would line up at QMP from there. The prospect of himself and Todd alongside Ferris in the premier class for HRC certainly builds anticipation as the series approaches its conclusion. 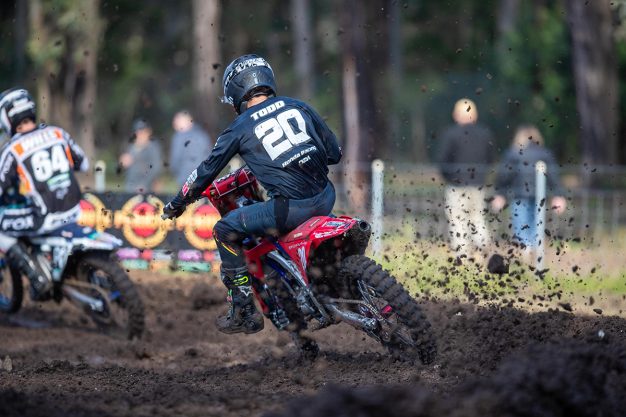 Q: What has happened to the factory-supported MX2 contenders?

A: MX2 has been a battle of survival this season, with several of key contenders out due to injuries sustained in between rounds. Alex Larwood – who was a primary challenger to Todd in the early stages – is sidelined from the remainder of 2022 with a shoulder reconstruction on the cards, and breakout MX2 rookie Ryder Kingsford damaged his ACL and MCL, requiring surgery and forcing him out. A replacement hasn’t been named yet for Larwood at Yamalube Yamaha Racing, while Hugh McKay has stepped into WBR Yamaha in place of Kingsford. The injuries don’t end there, however, with GasGas Racing Team’s Blake Fox’s 2022 charge brought to a premature end with an ACL and meniscus tear, while Husqvarna Racing Team’s Dylan Wills has shifted his attention to Australian Supercross (AUSX) following rotator cuff damage.

Q: Will anybody replace Clout at CDR?

A: Reigning MX1 champion Luke Clout dominantly started the season to take the overall victory at Wonthaggi and remind everyone why he is the champion. Then, disaster struck in the following round at Mackay when he crashed in moto one and broke his leg. In his absence, speculation has risen surrounding a potential replacement, with CDR team owner Craig Dack indicating before Wodonga that an immediate fill-in was not the priority, while hinting it may be considered at a later date. When asked again in June, after Gillman, Dack moved to say Tanti was the team’s sole focus, with no substitute for Clout expected in the upcoming rounds. Roughly six weeks after the incident, Clout indicated an August timeline to resume riding, but stated it is unlikely he will race the final two rounds. With Honda potentially having three riders in the premier class across QMP and Coolum against what seems likely to be Tanti on his own in CDR, it will be interesting to see if any team games are played in an attempt to attack the number nine’s red plate advantage.

Q: Have there been any recent standout performances?

A: When thinking about the most recent round at Coffs Harbour, two names come to mind when it comes to standout performances – Jayce Cosford and Charli Cannon. Cosford delivered a breakout MX2 ride in moto two to land third, while MXW leader Cannon impressed at round six to land P14 overall in MX2, after running inside the top 10 during the first moto. Cannon has since been confirmed to compete in the 2022 WMXGP finals in Turkey with the JK Yamaha Racing Team and chances are she will become one of our next great exports in the next year or two.