Assorted racer comments following the sixth round of the season.

In Quotebook, a selection of riders detail how their races played out in the sixth round of the 2022 Penrite ProMX Championship at Coffs Harbour. 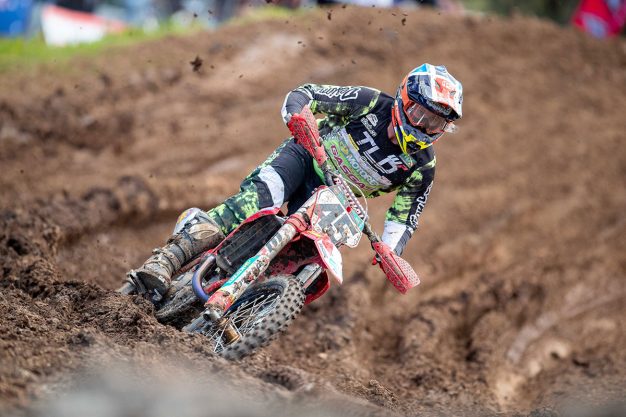 Todd Waters (Husqvarna Racing Team) – Sixth:
It was a tough one for us. I got some good starts and I was running up there, but I just really struggled to get a good feeling on the track, and I wasn’t gelling with it. Definitely made it tough on myself, made some costly mistakes where riders went by and I lost some places. Going back to the drawing board, I’ve got a bit of work to do on my settings and a lot of it is my fault in crossing between off-road and motocross – I need to get a bit closer to the off-road setting where it’s a bit softer and a bit more forgiving for hard-pack choppy tracks like this. I’m feeling confident for the sand, my bike always feels good in the sand, but heading into QMP I want to try and get a bit more confidence in those harder conditions.

Dean Ferris (Honda Racing) – First:
I had no choice other than to win both races if I want to be in a position to race for the championship. I cannot control what happens with the other riders, but I will give this my all to the very last race. The team made some positive changes from qualifying and between both races. Having Grant, our suspension tech, on hand was instrumental to our results today. The team is working so well.

Hayden Mellross (GasGas Racing Team) – Fifth:
It was a challenging day and we didn’t know what to expect of the track with the amount of rain we’ve had over the past couple of days. The track was super-technical, but in the first moto I didn’t use my legs enough early on, which resulted in massive arm-pump from the halfway mark. For the second moto we tried to focus on line selection and after a decent start I was able to battle with Kirk Gibbs and Todd Waters for most of the race. I passed Todd at the halfway mark, but he hung onto me like a bulldog and didn’t give me a moment to breathe! The second half of the race was a real challenge, but I’m happy with finishing fourth and excited to build on that for the final two rounds. We’re still working on finding the ideal bike set-up, but I’m encouraged to get a positive result and to be battling with the championship contenders. It shows we’re moving in the right direction, so we’ll continue trying new things to improve both the bike and myself.

Aaron Tanti (CDR Yamaha Monster Energy) – Third:
It was a good day without being a great day. I was able to get on the podium and increase my championship lead, but I felt as though I could have ridden the track a little better. Congrats to Dean, he rode exceptionally well, and I knew he would be good on a track like this, but I just made a few too many small mistakes and he was able to make the most of them. It’s frustrating when you do the work to get to the front of a national race and then let it go but Dean was a little better than me today. Still, we leave here with a 29-point lead in the championship which is great, and the team worked hard over the weekend given the conditions on the track and in the lead up. Thanks to everyone at CDR Yamaha, Monster, Fox and all our sponsors and the plan is to keep riding strong all the way to the finish.

Kirk Gibbs (KTM Racing Team) – Second:
I think this track sort of favoured me a little bit, being so deep and so gnarly. The track wasn’t quite as fast as what it could have been, but I’m really happy because three weeks ago I was laying up in a hospital bed. My thumb is sore right now and race day was a little harder than what it was practicing with it. I still think I am a top three guy, definitely, going into the last two rounds. I need to give my thumb a little bit of rest and then go back after it!

Jayden Rykers (Empire Kawasaki) – Seventh:
Conditions out there were challenging to say the least. I struggled in qualifying, but as the track dried out and more lines developed, I was able to find more of a rhythm and was able to stay in touch with the front guys in both races. The second moto in particular was good – I was able to show that I have the pace to run with the guys at the front of the pack, so now the aim for the next round is to put all the pieces together and push for a top five. Haruki Yokoyama (Empire Kawasaki) – Third:
My goal for this year was to get on the podium, so I’m really stoked to finally be on the box and achieve that goal.Getting on the podium at Maitland was a good little boost and I came into this weekend with more confidence. I was happy with my first race and I wanted another top three result in the second moto, but a sixth wasn’t so bad. I’m really keen for another strong performance at QMP.

Jai Constantinou (Empire Kawasaki) – 11th:
Today was tough and I wasn’t really in the fight all day. I struggled to find a flow with the track and as a result, it was hard to make up ground on the riders in front. Finishing the day with 8-11 results definitely wasn’t my best performance, but we’re putting it behind us and looking forward to the next round.

Wilson Todd (Terrafirma Honda Racing) – First:
I wanted to get to the lead quickly. From there, I controlled the gap behind me as there was no need to push the limits on this track. Grip was getting away from us, especially in the last race. I am just racing each race as hard as I can. I have not been thinking about the championship. The team and I will talk about the final two rounds, as I plan to race a CRF450R if the opportunity allows for it.

Rhys Budd (Yamalube Yamaha Racing) – Fourth:
One great moto and one not so great moto. The first moto was good as I was able to lead some laps and but in a strong ride all the way to the end. I got some arm pump out there, but I think every other rider also had it as well as the ruts made it a very tough track to race. In moto two, I didn’t get the start and then got hammered with roost which damaged my goggles. I just didn’t go forward after that. I need to be better in the second motos and something I will continue to work on. We still have four races to go in the championship and I will give it all I have to finish the championship on a strong both for myself and the team.

Charli Cannon (Yamalube Yamaha Racing) – 14th:
I’m really happy with that. I have never ridden at this track before and with the wet conditions, I didn’t get a lot of laps in qualifying but once I got that start in race one, I had to go with the boys. It was so much fun battling with them, and they all race me hard which is good. I was hoping for a top 20 or somewhere around there but to finish 14th for the day is so good and both races were so much fun. Those first few laps of race one was so intense, like nothing I had experienced before. The pace was fast, and it pulled me along. Thank you to everyone on the Yamalube Yamaha Team for doing an amazing job and to all the MX2 riders who were so encouraging and happy for me. I won’t do the QMP round but will do the final Women’s round at Coolum where I hope all the girls turn up and support the round and make for a great series.

Bailey Malkiewicz (Serco Yamaha) – Ninth:
It wasn’t the best weekend for me, and I struggled in both motos. The first was a combination of arm pump, crash and tweaking my knee, while the second was just a fight from start to finish. It was the best I could do given the situation and I will get some rehab in before the next round with a view to finish the final two rounds strongly.

Levi Rogers (WBR Yamaha) – Eighth:
It good to finally leave a track in 2022 having competed both races and riding at a reasonable level. I owe the WBR Yamaha team as I haven’t been able to get the results on the board but hopefully this is the start of some good rounds to finish off the championship and I can show them what I can really do. I got some good arm pump in race one and tried to ride through it but struggled as a result, had a small crash. It took me a while to get the bike started but the damage was done when I fell. The second race was much better and more what I think I’m capable of. I tried to just ride my own race, stay focused and not worry about what’s going on around me and I was able to get my best result at a national.Thanks to the WBR Yamaha team for standing by me and I hope to repay them with some good performance at QMP and Coolum.

Hugh McKay (WBR Yamaha) – 10th:
Race one was pretty good, and I felt I rode well in the conditions, but I struggled a bit in race two. I needed a better start to get away with the front group and I was outside the top 15, so I just made it hard on myself. But its great to be back with the WBR Yamaha team and I thank them for their support of me and look forward to the final two rounds.

Nathan Crawford (KTM Racing Team) – Second:
It’s a big weight lifted off my shoulders. It was a like a six-month build-up, with an injury like that, when you are sitting on the couch, the anticipation builds and you want to come back. Basically, today was all of that weight off my shoulders. It felt really good and I want to give a massive shoutout to Kyle Blunden and the whole team at KTM, my mechanic Luke – they have been so patient with me over the last six months and I couldn’t ask for a better way to repay them. In the second moto, I got a reasonable start and by the end of the first lap I was in second. I tried to tag on to Wilson [Todd] in front of me, he’s obviously got some really good sprint speed and he took off on the first four laps. For the last 20 minutes of the race, I hunted him down, and I was right on him in the last 10 minutes of the race. I was sitting there learning, gaining some confidence for the upcoming rounds in Queensland.