Honda Racing’s Dean Ferris kept himself in the title fight with perfect 1-1 moto scores at round six of the Penrite ProMX Championship in Coffs Harbour and trails the red plate by 29 points ahead of the final two stops in the 2022 series. CycleOnline caught up with the CRF450R rider after the races for this Debrief interview. 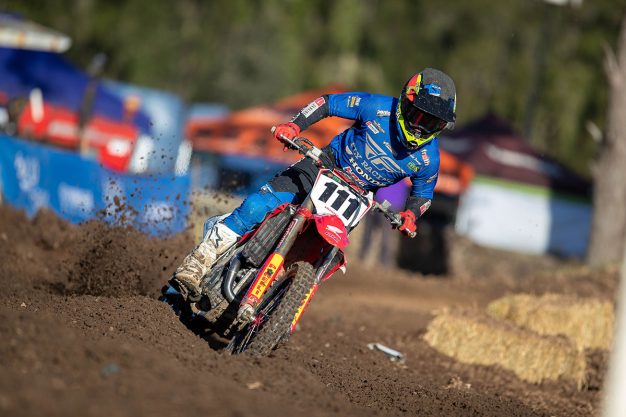 Congratulations on getting the overall. How important was it for you to rebound and get those wins, and can you highlight some of the key points that led to your return to the top step?

Yeah super important, I’ve given away some points to the competitors and I really had to deliver and I did that, which was satisfying. Key points, just went soul searching, found the belief and also kept trying to improve, improve my body, my fitness and my bike, communicating with the team, just everything. Did some mental work with my wife as well and I think it all just came together on the weekend. From now I will just try to keep looking forwards.

Moto one looked like a pretty interesting race. You jumped out, got that start then Aaron [Tanti] came by and had some pace before you clawed back, made a move and put the hammer down to take the win. Can you walk us through that race from your perspective?

Moto one, I went in with another like kind of new bike set up, so for me I was kind of learning the bike as we were going, so I was bit rusty in the first couple of laps I would say, even tightened up, pumped up a little. Aaron got me, and I just had to regroup. I learned a few lines and worked out some of my lines were better, and I put a charge in, he made a mistake and I took advantage of that, then just laid it down and put in some good laps and came back with a really good lead at the end of moto one.

With qualifying, that single-lap intensity hasn’t been your strongest point compared to the others, but you rebound and can deliver in the races where it counts. As you are able to get good starts regularly, in your preparation are you more focused on being able to deliver those consistent laps, or moving towards the final two rounds is that single lap intensity something you want to work on?

I wouldn’t say it’s my intensity, I know there is speed there, I’m just trying to work things out and we’ve been changing a lot of settings throughout the year. That’s my personal choice because I’m always looking for something better. Sometimes in qualifying, we might have a new setting and I’m kind of testing it. I think we are getting to the pointy end of where I want my bike now, I think I could work on some more pace which would definitely help me for sure.

The last two rounds being in Queensland, how do you feel about heading to QMP and then Coolum? The results you achieved at Coffs Harbour keep you in the title fight, is there anything you are going to change in your approach to the final two rounds?

I feel awesome about it, it’s just up the road and I know I am going to have heaps of supporters and a lot of people making noise for me, which is cool. I had a lot of supporters at Coffs and I could feel them cheering me on at the side of the track. I won’t change anything, other than trying to improve on every part of the program that I know I can, and if I can clean up some things in my race I believe I can get better results again.