Sweden the focus of Evans after huge Belgium qualifying crash 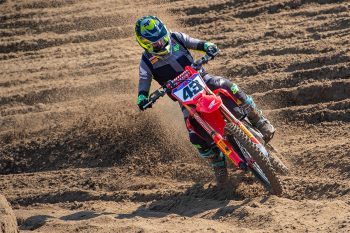 Australia’s Mitch Evans is focused on his recovery ahead of the MXGP of Sweden after a huge crash during the qualifying race in Belgium saw him eject mid-air.

Evans entered round 14 with momentum building after a strong second moto in the Czech Republic and was running third in the qualifying race at Lommel until disaster struck with three laps remaining.

The Team HRC rider appeared to catch his footpegs on the take-off of the triple and dismount his CRF450R before it cased the landing. In a gutsy effort, Evans attempted to race the first moto on Sunday but decided to retire from the event after 15 minutes, with the focus on healing ahead of round 15.

“Unfortunately, the after-effects from the crash yesterday were too much, and I had to pull off after about 15 minutes today,” explained Evans. “I’d actually moved through the field well, coming from near the back of the pack to around 15th but it took all my energy to do that, and I didn’t have anything left to give.

“Rather than risk further injury on a very tough track, I decided not to line up for race two, and hope to heal up and get myself ready for the next round in Sweden in a couple of weeks. Thanks to all the support I received this weekend, it certainly hasn’t been easy, but I’ve learned a lot and will continue to push hard for the rest of the season.”

Evans has confirmed on social media that he is ‘healthy and will be ready to go’ ahead of the MXGP of Sweden, at Uddevalla on 7 August.