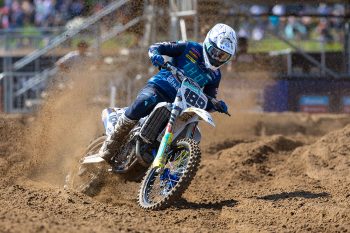 Standing Construct Husqvarna Factory Racing’s Brian Bogers secured a career-first MXGP victory at round 14 of the world championship in Belgium, as Jago Geerts emerged on top to extend in MX2.

Bogers passed Jeremy Seewer (Monster Energy Yamaha MXGP) and Jorge Prado (Red Bull GasGas Factory Racing) in the early stages of race one and didn’t look back to take a maiden win in the premier class.

Clavin Vlaanderen (Yamaha) bested Romain Febvre (Kawasaki Racing Team) on lap 14 for P2, as the number three stood on the podium once more as he crossed the line in third.

P3 in race two was enough to secure Bogers the overall, ahead of Vlaanderen who went 2-2 on the day to finish runner-up. Glenn Coldenhoff (Monster Energy Yamaha MXGP) rebounded from fourth in the opening bout to win moto two and elevate himself to third overall at Lommel.

Febvre was fourth courtesy of 3-4 moto scores, ahead of Seewer who completed the top five as he notched 6-5 finishes. Notably, red plate-holder Tim Gajser (Team HRC) was seventh overall with P7 in each moto.

It was a challenging weekend for Australians in Belgium, with Mitch Evans (Team HRC) crashing heavily during the qualifying race and unable able to complete the motos on Sunday due to repercussions from the fall. Jed Beaton (F&H Kawasaki) finished P16 with a 17-15 scorecard. 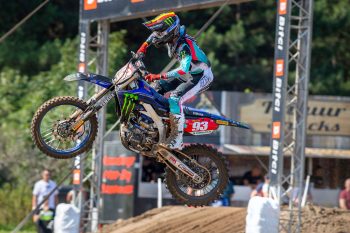 Race two saw Geerts take an important victory to secure the overall on countback, with de Wolf finishing second to land P2 at round 14.

In a day that saw many inconsistent results across the MX2, Vialle managed to place third at Lommel with 7-4 moto scores. Notably, the Red Bull KTM Factory Racing rider crashed in the opening moto and had to work his way back through the field from P17.

Laegenfelder was eighth in moto two after multiple crashes and fourth in Belgium thanks to his stronger performance in the opening race, as the top five overall was completed by Roan Van De Moosdijk (Husqvarna). 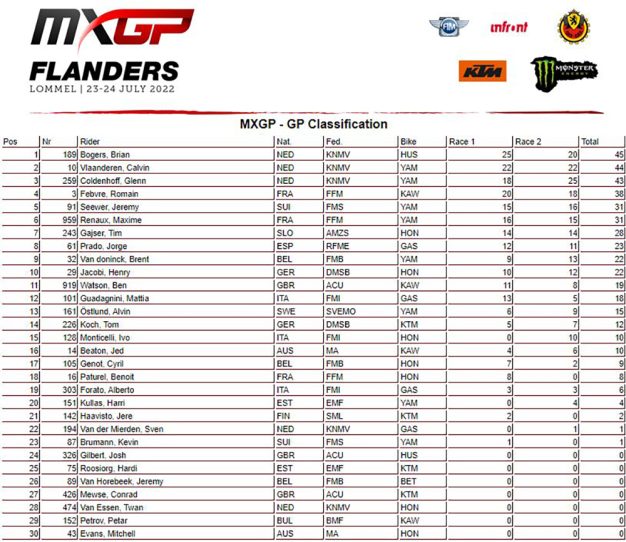 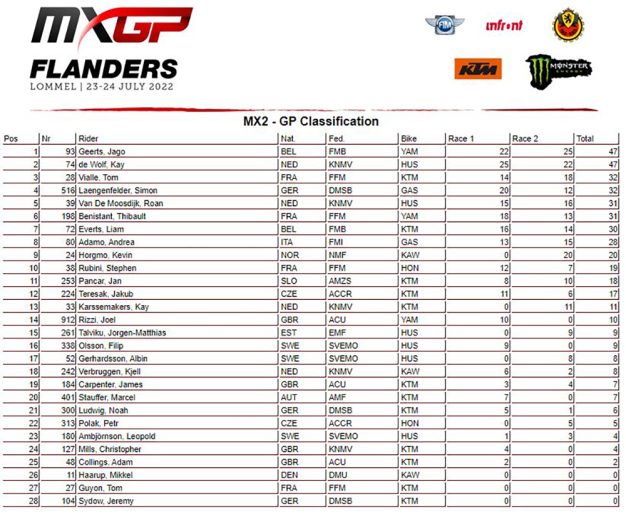