Honda Racing’s Wilson Todd continued his MX2 dominance at round six of 2022 Penrite ProMX in Coffs Harbour with another double victory, as Ryan Alexanderson emerged on top in MX3, unbeatable in each of the motos.

A clinical performance by Todd saw him take his 10th moto victory of the season in MX2 race one.

Budd finished second after grabbing the holeshot and holding P1 for the opening nine minutes. Yokoyama held off a hard-charging Nathan Crawford (KTM Racing Team) for the final spot on the podium, with the Queenslander running inside the top three before crashing and having to work his way back from seventh. Fourth, nonetheless, was a strong ride for the number 199 in his racing return.

Jesse Dobson (Serco Yamaha) crossed the line fifth and showed great pace in the middle of the race to recover from a poor start and work his way inside the top three, before struggling in the closing stages. Noah Ferguson (GasGas) worked his way into sixth, ahead of Hugh McKay (WBR Yamaha), Barham, Jai Constantinou (Empire Kawasaki) and Bailey Malkiewicz (Serco Yamaha) who completed the top 10, also suffering a fall during the opening bout.

Todd scored the victory again in moto two, taking the lead in the early moments of the first lap and withstanding a late surge by Crawford. Determined to make amends for his race one mistake, Crawford delivered a spirited charge in the closing stages, capping off a strong comeback to national competition with P2, just 1.2 seconds from Todd.

Yamaha privateer Jayce Cosford delivered a breakout performance to hold third for the majority of the moto and complete the rostrum. Dobson finished a distant fourth, ahead of Rogers, Malkiewicz and Budd – who was unable to recover from a poor start and finished P8, which was just enough to keep the title alive. Noah Ferguson and McKay completed the top 10.

Todd’s double victory secured him the round victory with a perfect 50 points, as Crawford was runner-up and Yokoyama P3 on the day. After six rounds, Todd holds a 98-point lead in the title race ahead of Budd, with Dobson third, a further 13 points back. 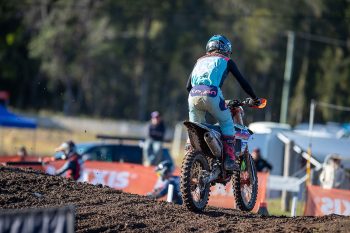 Alexanderson (KTM) was the man to beat in MX3 with two commanding race wins to claw his way forwards in the championship standings.

Second overall was Jack Mather with consistent 4-3 scores, as Brock Fylnn (Husqvarna) bounced back from P7 in moto one to finish second in race two, which elevated him to P3 on the day.

Looking at the championship standings, Minear continues to lead on 230 points, with Mather in second on 211 and Williams third with 195. Alexander is now fourth, just three points adrift of the Honda rider. 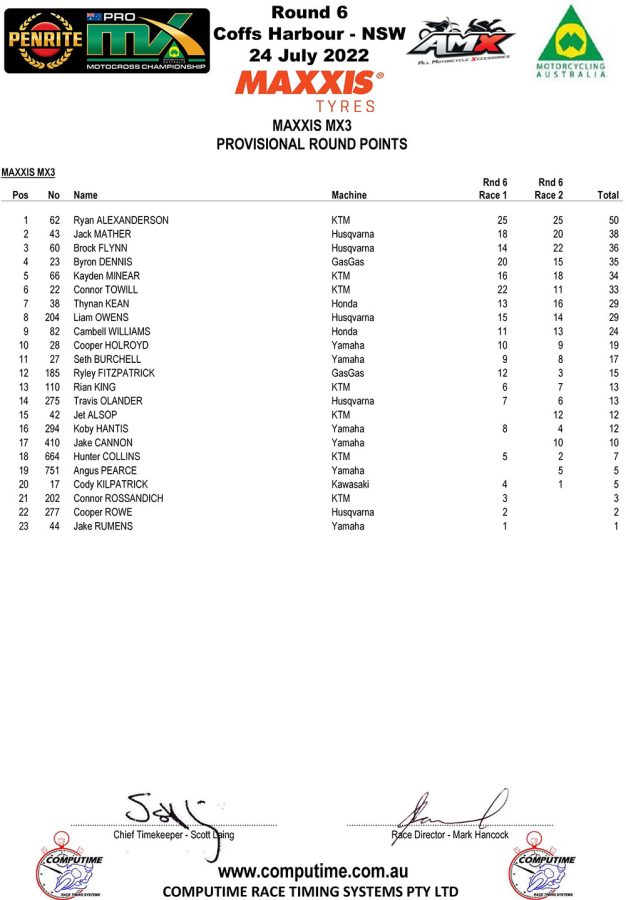