Team Honda HRC has claimed both overalls at the Washougal round of the 2022 Lucas Oil Pro Motocross Championship, as Chase Sexton and Jett Lawrence took the round wins.

Despite not winning a moto, Team Honda HRC’s 250MX series leader, Jett Lawrence, took yet another round win at the 2022 Lucas Oil Pro Motocross Championship after a close day of racing at Washougal.

Lawrence was joined by Justin Cooper (4-1) and older brother Hunter (1-4) on the round podium.

At the 10-minute mark, and after a prolonged period of pressure, Hunter forced his way past the Japanese rider and tried to sprint away, leaving Shimoda in Jett’s sights.

Their battle whittled down Hunter’s three-second lead and as the race wore on the pressure between the three continued to ramp up.

Late in the race Jett stood Shimoda up entering the whoops, but Hunter would control the closing laps to take the win, with Jett second and Shimoda third.

Cooper made a late move on Hammaker to reclaim a distant fourth. P

Cooper took the holeshot from Shimoda and Hunter, with Jett in fourth.

Cooper progressively stretched out a comfortable lead as Shimoda and the Lawrence brothers again went deep into the trenches.

After several laps of pressuring Shimoda, Hunter laid his bike over in a corner, dropping him to fourth.

With 11 minutes to go, and after a prolonged period of pressure, Jett found a way past Shimoda into second and the round overall position and was content to stay there and bank the points.

Hunter Lawrence put in some furious final laps to close back on Shimoda but ultimately ran out of time, finishing a hard-fought fourth.

Cooper took a five-second race win, while Jett’s 2-2 result was enough to take a one-point round win over Cooper and Hunter.

Jett now holds a 28-point lead over Hunter (355 to 327 points) in the championship points chase, with Shimoda third on 306 points. Team Honda HRC’s Chase Sexton has halted the win streak of championship leader Eli Tomac, after the pair went head-to-head for two full motos at the Washougal round of the Lucas Oil Pro Motocross Championship.

When the dust settled, Sexton would win on count-back as he finished 2-1 to Tomac’s 1-2, while Monster Energy Kawsasaki’s Jason Anderson posted a brace of third-place results for third overall.

Sexton quickly charged into the lead, then three laps later, Dungey experienced a bike issue while running comfortably in second.

The mechanical DNF promoted Tomac into second and Roczen third. Tomac began turning the screws on Sexton, and as they distanced the rest of the field Tomac took the lead on the fifth lap.

Soon after Anderson passed Roczen for third, Tomac fell and collected Sexton at the same time. The pair desperately tried to restart, with them commencing battle at the same time, again with Tomac just in front.

The series leader would withstand a late desperate charge from Sexton to take the win, with Anderson and Roczen a distant third and fourth.

The second moto saw Sexton bounce back for the win, but it started off the gate, as the early championship leader  scored a huge holeshot to start the second moto, followed by Tomac and Anderson.

The two championship front-runners quickly put daylight between themselves and Anderson, with the margin stretching and compressing as they went toe-to-toe in a classic race-long battle.

With three laps remaining, Sexton finally managed to pull a gap on Tomac and the points’ leader surrendered defeat as Sexton would take the win by 8.4 seconds.

Anderson crossed the line a distant third, while Dungey, who was outside the top 20 on the opening lap due to his poor gate pick, put in an impressive performance to finish fourth.

In the championship fight, Tomac retains his five-point buffer over Sexton (364 points to 359 points) as the series heads into a two-week break, while Anderson continues his best-ever outdoor season in third, 79 points further back.

The ninth round of the Pro Motocross Championship will be held at Unadilla, NY on 13 August. 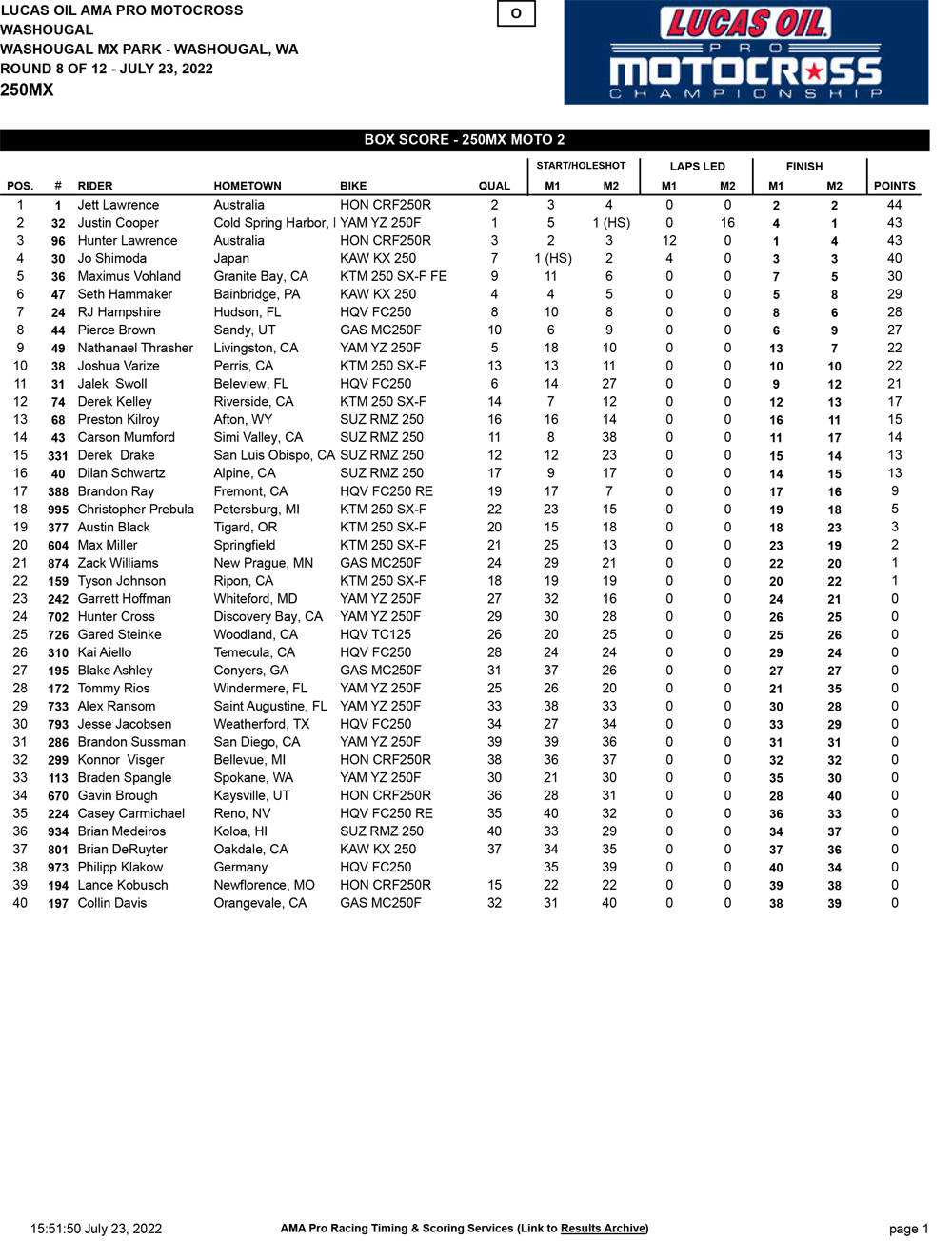 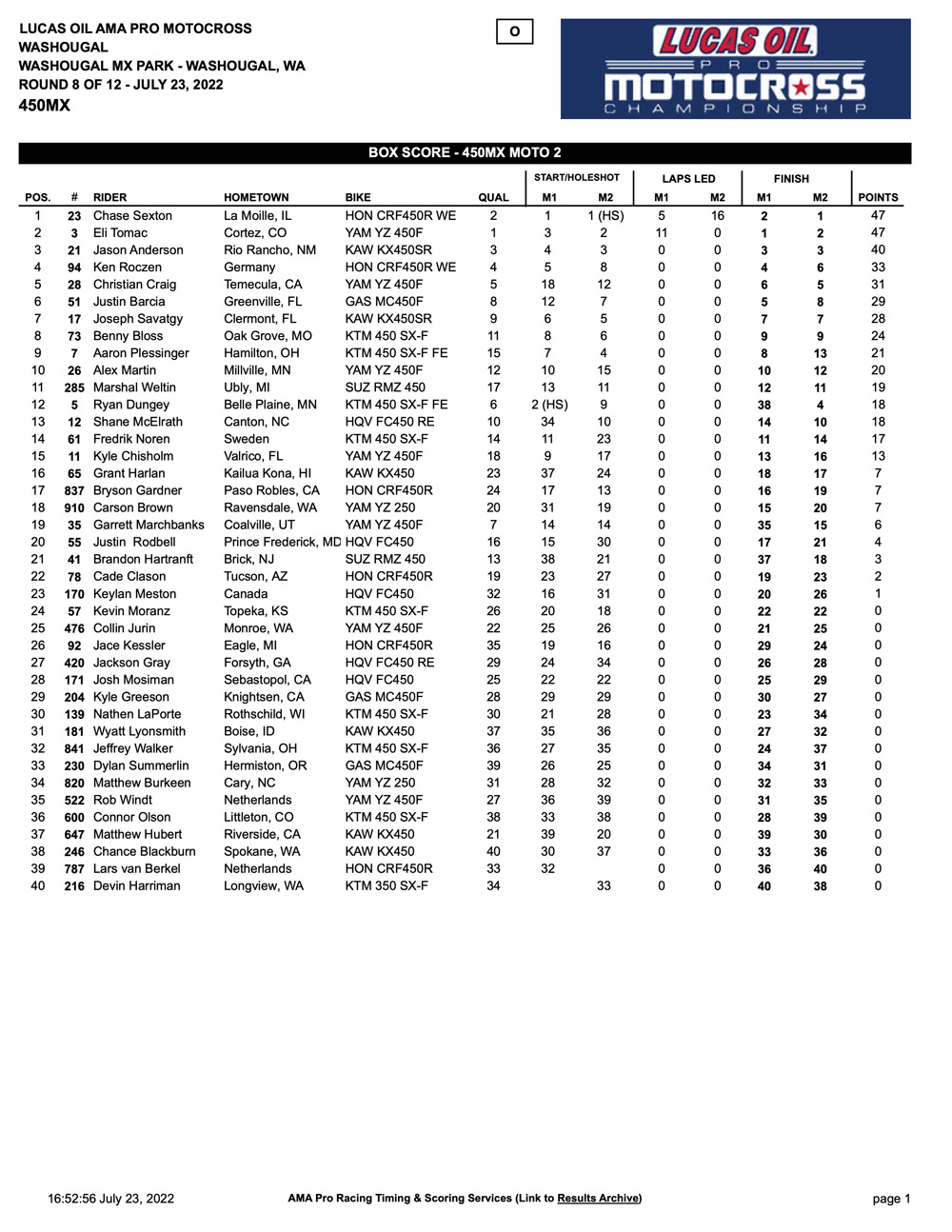