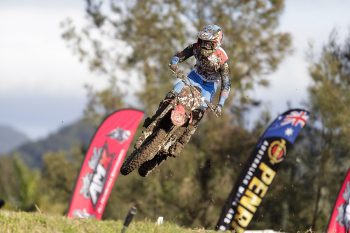 A late charge from Wilson Todd saw the Honda Racing rider storm to the top of a muddy MX2 qualifying at Coffs Harbour and secure first gate pick for round six of the 2022 Penrite ProMX Championship.

Serco Yamaha’s Jesse Dobson led for the majority of the session, only to be eclipsed by Todd in the closing stages.

Todd’s fastest lap of 1.43.309s was half a second quicker than the number 14, in P2. Third was Bailey Malkiewicz (Serco Yamaha) a further two seconds back, with the returning Nathan Crawford (KTM Racing Team) in fourth as Japanese talent Haruki Yokoyama (Empire Kawasaki) completed the top five.